The Buzz Around STING Agonists

Checkpoint inhibitors that reactivate a patient’s immune system to destroy tumors revolutionized cancer therapy, with the Nobel Prize in Physiology or Medicine 2018 jointly awarded to James P. Allison and Tasuku Honjo “for their discovery of cancer therapy by inhibition of negative immune regulation”. For some cancer patients, antibody drugs like pembrolizumab and ipilimumab have remarkable effects, however not all tumors are susceptible to checkpoint blockade. If “cold” tumors that are refractive to traditional therapy approaches could be made susceptible to immunotherapy, it would improve patient outcomes. Therefore, any mechanisms that lead to infiltration of tumors by immune cells are of therapeutic interest.

One such pathway, STimulator of Interferon Genes (STING), is showing potential to turn these “cold” tumors “hot” and make them susceptible to immunotherapy through the activation and recruitment of key immune cells. This blog gives an overview of the history of STING, and highlights why pharmaceutical companies are making a beeline to develop STING agonists.

The Story of STING

The innate immune system acts as a first line of defense against pathogens, with the activation of pattern recognition receptors (PRRs), a crucial component of innate immunity. STING was first identified as a cytosolic nucleic acid sensor with an important role in the production of interferon (IFN). While studying the immune response to pathogens, Glen Barber noticed that cells missing the STING protein were vulnerable to viral infections, suggesting that this protein was important in mediating the anti-viral immune response, including inducing expression of Type I IFN (Ishikawa and Barber 2008). It wasn’t long before research interest in this area gathered momentum and several key papers that furthered our understanding of STING, and its role in innate immunity, were published. Although it is only a little over a decade since its discovery, much has already been elucidated about STING and the role it plays in host immunity.

The identification of the role of a group of compounds known as cyclic dinucleotides (CDNs) that can activate the STING pathway was an important piece of the STING signaling pathway puzzle. A bacterial CDN, cyclic diguanylate monophosphate (c-di-GMP), was shown by Russell Vance and colleagues to bind to mammalian STING receptors and initiate an innate immune response (Burdette et al. 2011).

A key discovery was that STING is activated by DNA from dying cells (Anh et al. 2012). Treatments like chemotherapy/radiotherapy, which lead to self-DNA being leaked from dying cells, may also activate this pathway to cause tumor regression.

The natural agonist of STING, cyclic GMP-AMP (cGAMP), which is created by cyclic GMP-AMP synthase (cGAS) binding to DNA and linking two nucleotides together, was discovered in 2013 by Zhijan Chen and colleagues (Sun et al. 2013) with this discovery filling in the gaps in the STING pathway (Figure 1). 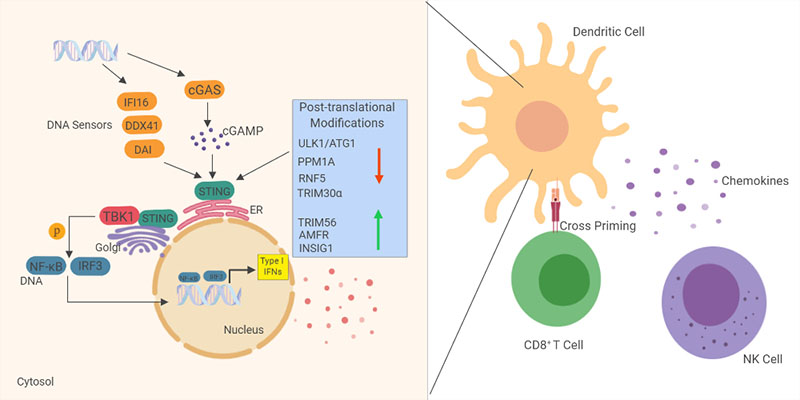 Fig. 1. Overview of the STING pathway. STING resides in the endoplasmic reticulum where it is a sensor of cyclic dinucleotides like cGAMP. It binds to these molecules and translocates to the perinuclear area to activate the kinase TBK1, which phosphorylates and activates IRF3, leading to the transcription of Type I IFNs and inflammatory chemokines and cytokines. Activation of this pathway leads to an infiltration of immune cells (like dendritic cells, natural killer cells, and CD8+ T cells) and anticancer effects, including dendritic cell priming of cytotoxic T cells. STING activity is tightly regulated by post-translational modifications by different proteins.

A STING in the Tale

It is clear that the cGAS-STING pathway is crucial for cellular immune sensing and that STING activation appears to be necessary for the anticancer immune response; IRF3 knockout mice and STING knockout mice both have impaired tumor T cell responses (Zhu et al. 2019). A clinical study also found that reduced STING expression is present in a type of gastric cancer and associates with worse prognosis for patients (Du et al. 2021).

However, the role STING plays in regulating cancer immunity may not be as straightforward as it initially appeared. There is emerging evidence for a potential inhibitory effect of STING, including activation of immune suppressive cells (like Tregs and myeloid-derived suppressor cells) under some conditions (Zhu et al. 2019). This means that under some circumstances, STING may enhance tumor survival and activating this pathway may not always have desirable effects.

Why STING Agonists Are of Interest

To make tumors receptive to immunotherapy, the adaptive immune system must first overcome any tumor immune tolerance. When activated, the cGAS-STING pathway leads to the activation and recruitment of immune cells into the tumor, like dendritic cell (DC) priming and migration, as well as cytotoxic CD8+ T-cell priming and cytotoxicity, therefore promoting tumor regression (Du et al. 2021). Tumor regression can also occur from the promotion of senescence of cancer cells and induction of apoptosis (Du et al. 2021). As activation of the cGAS-STING pathway can jump start the adaptive immune response in this way, it is hoped that agonists could be used in combination with cancer therapies to improve their success.

Will STING Live up to its Promise?

A number of STING agonists have been discovered, or developed, to try and either treat tumors alone, or to be used in combination with other cancer therapies to enhance their performance (La Nour et al. 2020). These include flavone acetic acid (FAA) and 5,6-dimethylxanthenone-4-acetic acid (DMXAA). Unfortunately, while DMXAA showed favorable results in mice, it didn’t bind preferentially to human STING and failed clinical trials (Zhu et al. 2019).

Phase I and Phase II clinical trials involving identified STING agonists, like MIW815 and MK-1454, are underway to test their therapeutic potential (Du et al. 2021). However, it will be some time before the clinical potential of these agonists is fully realized. Moreover, the emerging complexity of interactions, between the cGAS-STING pathway and other signaling pathways, means that there is still a lot to be discovered to fully comprehend how we can promote desirable effects while minimizing unwanted ones. Will STING agonists revolutionize the immuno-oncology fields in the same way as checkpoint inhibitors? Only time will tell.

Are You Studying the STING Pathway? 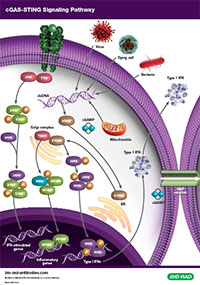 Bio-Rad offers a range of products and resources to study the cGAS-STING pathway, including a new poster to support your research.