The 2018 Nobel Prize announcements have brought exciting news of not one but two prizes awarded in recognition of ground-breaking achievements in the antibody field: phage display and immunotherapy. Many Congratulations to George Smith, Sir Gregory Winter, James Allison and Tasuku Honjo on this fantastic accomplishment!

The Nobel Prize in Chemistry 2018

One half of the Nobel Prize in Chemistry was awarded jointly to George P. Smith (University of Missouri, Columbia, USA) and Sir Gregory P. Winter (MRC Laboratory for Molecular Biology, Cambridge, UK) “for the phage display of peptides and antibodies”.

George Smith developed a pioneering technique called phage display (Smith 1985). This technique involves inserting a gene of interest into a protein coat gene of a bacteriophage, leading to the peptide being ‘displayed’ on its surface.

Sir Gregory Winter then harnessed this technique for the directed evolution of antibodies (Figure 1), and in doing so revolutionized the antibody therapeutics field (Clackson et al. 1991).  At Bio-Rad our custom antibody service isolates antibodies from the Human Combinatorial Antibody Library (HuCAL®) using CysDisplay®, a proprietary form of phage display technology featuring the surface display of an antibody fragment on filamentous phage via a cleavable disulfide bond. 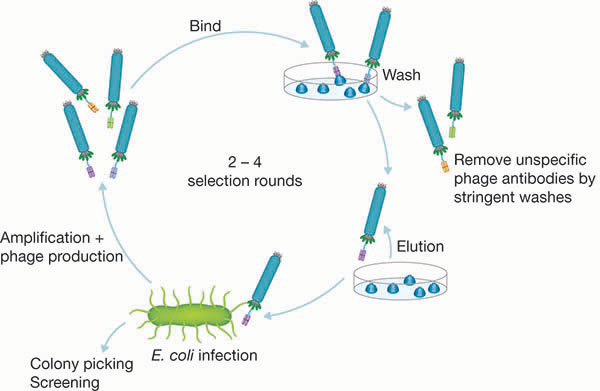 The other half of the prize was awarded to Frances H. Arnold (California Institute of Technology), for her work on directing the evolution of enzymes.

The Nobel Prize in Physiology or Medicine 2018

The Nobel Prize in Physiology or Medicine was jointly awarded to James P. Allison and Tasuku Honjo “for their discovery of cancer therapy by inhibition of negative immune regulation”. Their research has paved the way for the immunotherapy field as a new cancer treatment strategy.

In the 1990s, Allison discovered the first immune checkpoint CTLA-4 (Leach et al. 1996) and developed an antibody that could bind to CTLA-4 and block its function as a T cell brake.  Eventually his research led to the development of a new therapy for cancer, ipilimumab (Figure 2).

Honju discovered a different protein expressed on the surface of T cells, PD-1 (Ishida et al. 1992). Similarly to CTLA-4, PD-1 represents an immune checkpoint and drugs that target this pathway have been developed into a successful cancer therapy (Figure 2). 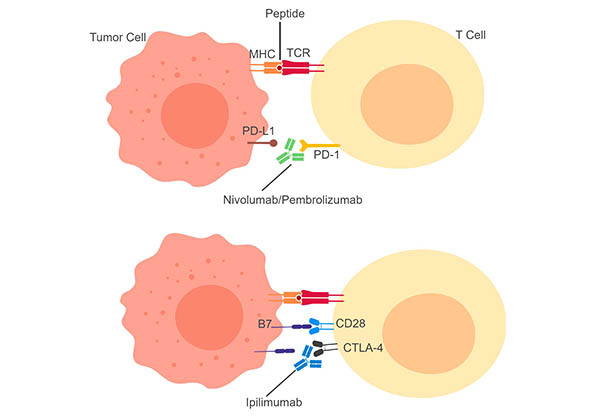 Fig. 2. Principles of immunotherapy. PD-1 is an inducible gene on activated T cells and binding of PD-L1/2 to the PD-1 receptor leads to a reduction in T cell activation and effector functions. Drugs that block this interaction (nivolumab and pembrolizumab) have been developed as effective cancer treatments. T cells are activated when TCRs bind antigen displayed in the MHC together with CD28:B7 co-stimulation. CTLA-4 competes with CD28 for binding of B7 molecules and increased CTLA-4:B7 binding limits T cell survival. CTLA-4 can be blocked with drugs such as ipilimumab, and release the brake on T cell activation.

Bio-Rad recognizes the importance of immuno-oncology research and recently launched new anti-idiotypic antibodies for two licensed drugs that target the PD-1 pathway: pembrolizumab and nivolumab. These antibodies enable bioanalytical and patient drug level monitoring assays of these drugs. Serendipitously, these antibodies have themselves been made possible through CysDisplay technology highlighting the progress that both Nobel Prize winning achievements have made possible.

HuCAL technology was used to develop high specificity, high affinity antibodies to distinguish between protein isoforms with only minor differences....