Pathogens have evolved to utilize a plethora of immune evasion strategies to fight for their survival. However, because humans possess a versatile, plastic, and trainable immune system, a significant amount of backup and fail-safe mechanisms are incorporated into the design and function of the immune system. A typical example is NETosis that triggers the release of neutrophil extracellular traps (NETs) to trap and kill extracellular pathogens that are difficult to phagocytose. Similar to NETs, pore-induced intracellular traps (PITs) immobilize intracellular pathogens, but they do not directly kill the pathogen. However, PITs do an excellent job of restraining the pathogen and turning on all possible alarms to facilitate the clearance of the trapped intracellular pathogen.

PITs are the aftermath of an inflammatory cell death, a cellular corpse of a ruptured plasma membrane that houses aggregates of insoluble cytosolic contents and damaged cell organelles.  PITs can be accidental, as in the case of necrotic cell death, and programmed like necroptosis and pyroptosis (Jorgensen et al. 2016a). In the context of an infection, PITs are mainly triggered by necroptosis and pyroptosis, with pyroptosis-triggered PITs being the better studied of the two.

PITs are employed to trap intracellular pathogens (like Salmonella typhimurium, Listeria monocytogenes, Legionella pneumophila, and Influenza A virus) that infect host cells or persist in immune cells without being cleared. Damage to the membrane of pathogens imprisoned in PITs renders them susceptible to subsequent attack and clearance by secondary phagocytes recruited through the release of inflammatory cytokines (Jorgensen et al. 2016b) and DAMPS (damage-associated molecular patterns). In the end, the trapped pathogen is engulfed and killed by macrophages and neutrophils that are recruited to the site of the corpse (Jorgensen et al. 2016a). Apart from chemoattracting immune cells, PITs also display unique eat-me signals that attract phagocytes to engulf them in a process termed efferocytosis.

In a study of pyroptosis-triggered PITs, cellular debris and PITs were reported to be mainly cleared by scavenger receptor-mediated efferocytosis (Jorgensen et al. 2016a). In addition, a role was also attributed to complement proteins in the clearance of PITs. Complement proteins facilitate PITs efferocytosis by recruiting secondary phagocytes to the sites of PITs and by opsonizing PITs to effect their uptake (Jorgensen et al. 2016a). The clearance of PITs is a fascinating process; secondary phagocytes, predominantly neutrophils, feast on the PITs by engulfing chunks of the cellular corpse, with and without entrapped pathogens. The pyroptosis-induced damage sustained by the pathogen facilitates its clearance. Eventually, the previously damaged pathogen is killed by an oxidative burst in the secondary phagocyte (Jorgensen et al. 2016a). Without the involvement of PITs, the pathogen would have been too virulent and able to escape the immune system. 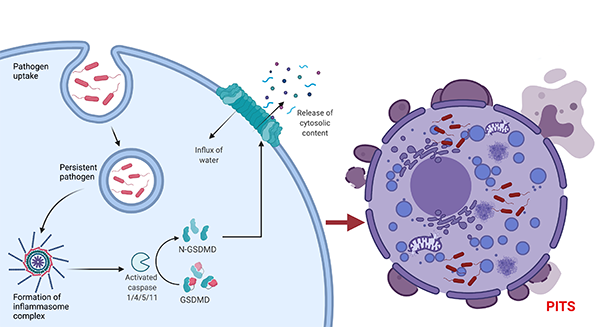 Fig. 1. Mechanism of PITS formation. Cleaved GSDMD forms pores on the plasma membrane, which leads to an influx of water and eventually cell rupture.

The Power of PITs

Research has focused on pyroptotic triggered PITs. This is probably because pyroptosis is the more relevant, or more conveniently, studied type of cell death in the context of an infection. Since necroptosis and pyroptosis have similar cell corpses (Jorgensen et al. 2016a), their PITs might have conserved features. In a study investigating the effect of pyroptosis-triggered PITs on S. typhimurium, the ruptured but relatively intact plasma membrane imprisoned the pathogen and held it in place (Jorgensen et al. 2016a). While PITs do not kill trapped pathogens, the process of their formation was reported to immobilize and impair the pathogen (Jorgensen et al. 2016a). In pyroptosis-triggered PITS, trapped S. typhimurium had a reduction in infectivity and showed features of compromised outer membrane, which was suggestive of damage from the pyroptotic process (Jorgensen et al. 2016a). This damage was assumed to be caused by gasdermin D, the chief executor of pyroptosis, whose N-terminal can bind to pathogens and perforate their cell membrane (Ding et al. 2016). Similar characteristics can also be assumed of pathogens trapped in necroptosis triggered PITs since MLKL was shown to inhibit the replication of Listeria monocytogenes (Sai et al. 2014).

The immune response to pathogens is not a fool-proof defense mechanism. Some pathogens make themselves unrecognizable, some have thick, resistant armor, and certain intracellular pathogens subvert the immune response by using immune cells as Trojan horses for their invasion. Thus, processes, such as the formation of PITs, serve to provide a regulated backup mechanism to eliminate intracellular pathogens that had previously escaped the initial immune response. Indeed, the formation of PITs is inflammatory, yet it seems well thought out that PITs are also designed to initiate their clearance and, ultimately, the resolution of inflammation. Like NETs, the formation of PITs is the immune system's way of saying "no loose ends," as PITs make the immuno-evasive become immuno-susceptible.

We have a range of informative resources like mini-reviews and educational summaries, as well as a comprehensive range of antibodies to support your research on the innate immune system.

This blog was awarded 3rd place in the 2021 Bio-Rad Science Writing Competition....