From a broad immunology perspective, we can classify bacteria into the “good” commensal bacteria and “bad” pathogenic bacteria. One of the primary functions of commensal bacteria is to protect against invasion and colonization of the pathogenic bacteria in the gut. It is therefore crucial that our immune systems can distinguish between commensals and pathogens and populate the gut with commensals while removing pathogens. It is the role of an important, but often overlooked, component of our immune system to take on this duty.

The Role and Structure of Mucins

Mucins are large, heavily glycosylated proteins produced by epithelial cells in most animals (Bansil and Turner 2006). They are found in all mucosal membranes, where they provide the molecular framework of mucus. While mucus, like snot, outside of the body might be thought of as revolting, inside of the body it plays an important part in defense against pathogens.

In the gut, the network of mucins forms a mucus layer and acts much like a sieve; it restricts pathogenic molecules and bacteria from entering the body from the gut lumen, while selecting and entrapping the commensal bacteria to colonize the gut (Figure 1). 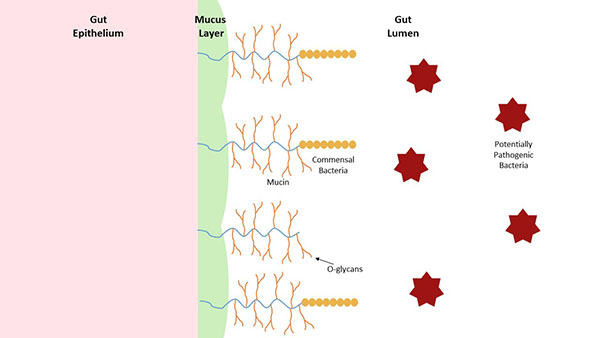 Fig. 1. Illustration of mucin action. Mucins trap commensal bacteria in the gut lumen, while the potentially pathogenic bacteria pass through the gut without colonizing.

Mucins must be highly specific in order to bind certain bacteria and either keep or remove them from the gut. The structure of mucins confers this specificity. All mucins have tandem repeat (TR) domains, short DNA sequences that are decorated with O-glycans. This decoration pattern provides a specific fingerprint to each different type of mucin and determines which bacteria the mucin can bind.

In an exciting paper published in Nature Communications in early 2021, Nason et al., from the University of Copenhagen, designed synthetic mucins. This platform could allow mucins to be exploited for various beneficial purposes, such as in drug delivery.

In order to exert maximal beneficial effects, drugs need to reach the correct place in the body and remain there for sufficient time. Current drug delivery systems in the body are often challenged by poor bioavailability of the drug, meaning only a relatively small percentage of the drug administered actually reaches its final target.  If mucins can keep good bacteria in the gut, could they be used to keep therapeutic drugs there too?

Mucins are picky about what they bind to and do not ordinarily bind to drugs. However, bacteria-like sequences could be engineered on to drugs. This would disguise the drugs as bacteria. Synthetic mucins, which have been engineered to specifically bind the bacteria-like sequences on the drugs, could then bind to and keep the drug in the gut for long enough to be absorbed across the epithelium of the gut and reach its target in the body.

The different synthetic mucins were then tested in their ability to bind to Streptococcal bacteria. A distinct mucin-binding module on streptococcal bacteria, which they named X409, was identified. X409 was found to be responsible for driving interactions with mucins as deletion of X409 module completely prevented bacteria-mucin binding (Nason et al. 2021).

Mucins Are a Potential Alternative to Antibiotics

In an article by Science Daily, Rebecca Nason, the first author of the seminal mucin paper, spoke of the research group’s hopes that their synthetic mucin producing technology could be used to create alternatives to antibiotics.

Antibiotics work by killing bacteria in our bodies but a well-known problem is the development of antibiotic resistance.  Over time, mutations arise in bacteria that give them a competitive advantage over the rest of the bacteria population, resulting in bacterial immunity to antibiotics, meaning they can live on and cause harm to our bodies.

Mucins Versus Influenza A

As well as regulating bacterial colonization in the gut and helping to populate the gut with commensal bacteria, mucins also play a role in stopping influenza A entry into the epithelial cells. Influenza A specifically binds sialic acid-expressing receptors to trigger its entry into epithelial cells by endocytosis. Sialic acids are very common terminal sugars in glycosylated molecules, including mucins. This means that mucins can compete with sialic acid-expressing receptors to bind influenza A virus and modulate both the infection process and the host response (McAuley et al. 2017).

Nason et al. used competition assays to show that influenza A virus binds to specific mucin TR domains preferentially over LAMP1, which is a potent influenza A virus receptor. The mucin TR clears the virus, whereas LAMP1 helps it colonize. This suggests that mucins could be used as an anti-influenza A tool.

The Unlocked Potential of Mucins

Despite the importance of mucins in our bodies, there is much we are yet to understand about them, in part due to their structural complexity and heterogeneity as a population. While isolating mucins from mucus in our bodies is possible, being able to produce mucins synthetically will allow new experimental approaches to be applied. Hopefully we will learn more about them and their potential as drug delivery systems, alternatives to antibiotics, and therapeutic potential. By developing a system to synthesize different mucins, Nason et al. have made a huge step towards utilizing mucins in these novel ways.

Bio-Rad has a range of useful mini-reviews, educational summaries, immunology tools, and blogs to help you with your experiments.

In this guest blog, Janielle Cuala, tells us about an interesting link between COVID-19 and new-onset diabetes and the research her lab is doing in th...