If you use proliferating cells as part of your research, you will know how important it is to monitor their growth rate. Cells in culture that divide at an abnormal rate might be a sign that something is amiss with their growth conditions and may affect the validity of experimental results, not to mention leaving you with too few cells for your experiments.

In addition to monitoring cell growth in culture, many experiments aim to compare the proliferation, or health, of populations of cells treated in different ways. For example, you might want to know the effect of a new drug candidate on cell division rate, by comparing the proliferation of treated and untreated cells. These experiments are so routine that it’s important to have a simple, reliable method that you can use every time. Access to scientific documentation, protocols, troubleshooting advice, and other resources can also be crucial for ensuring you get the best from your method of choice.

Thankfully, a wide range of tools and techniques for tracking cell growth are available, and one of the best in vitro detectors of cell proliferation is alamarBlue. In this blog, we explain what alamarBlue is and how it works, and then explore three main benefits of this reagent. We will also introduce you to useful resources to support your studies with alamarBlue.

alamarBlue contains the cell-permeable, non-toxic, REDOX indicator dye resazurin. In response to cellular metabolism, the dye changes color from weakly-fluorescent blue to strongly-fluorescent pink (Figure 1). The intensity of pink fluorescence is proportional to the number of living, respiring cells; therefore, alamarBlue is a direct indicator of cell health.

Why You Should Use alamarBlue:

In contrast with other proliferation reagents, alamarBlue doesn’t interfere with the electron transport chain or affect cell respiration or function, and is therefore not toxic and safe to use (O’ Brien et al. 2000). It also means that alamarBlue may be easier to acquire than toxic compounds for teaching labs and labs with project students.

Unlike toxic proliferation agents, cells exposed to alamarBlue remain fully functional, viable, and healthy, unaffected by the presence of the indicator. Combined with the fact that you don’t need to lyse the cells to measure alamarBlue activity, you can keep your cells growing after measuring proliferation, and take repeated measurements at later timepoints. This makes alamarBlue suitable for long-term time course studies.

Advantage 2: alamarBlue Is Simple to Use

alamarBlue has a simple workflow: add the reagent to cells, incubate, and measure (Figure 2). Being a highly trusted and cited compound, a lot of practical advice, protocols, and published experiments are available to support you.

alamarBlue is compatible with a wide range of culture media, so you probably won’t need to change your cell media before adding alamarBlue. Mammalian cells need to be incubated with alamarBlue for at least 1–4 hours with standard culture conditions: at 37°C and between pH 6.8 and 7.4. The color change as a readout of cell proliferation can be measured using either fluorescence or absorbance, whichever is most convenient for your lab. Absorbance is monitored at 570 nm and 600 nm, fluorescence is monitored at 530-560 nm excitation wavelength and 590 nm emission wavelength. You can then make use of simple alamarBlue calculators to crunch the numbers and indicate how fast your cells are growing during your timeframe. 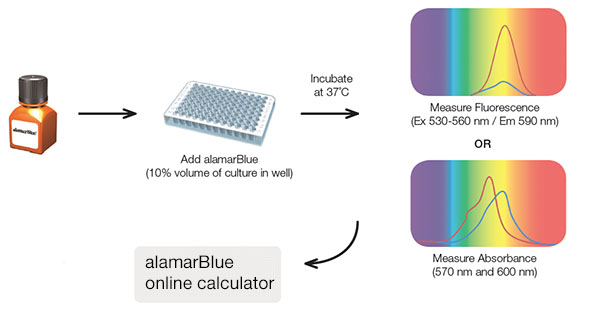 The flexibility of alamarBlue is another major reason why it is so widely used and has become so heavily trusted as a proliferation agent (it has over 3,000 citations on PubMed). It is always easier to order one reagent and use it across a wide range of experiments, rather than switching back and forth between protocols.

In addition to cultured mammalian cells, alamarBlue is also suitable for other cell types including bacteria, yeast, fungi, and protozoa, and is compatible with adherent or suspension cells. alamarBlue can also be used in experiments where cell count is low, with the ability to detect as few as 50 cells in culture! It is suitable for use with phenol red and it just shifts measurement values a little. alamarBlue is a good choice for a wide range of applications, including cell proliferation assays, bioassays for relative cytotoxicity, and cytokine assays.

The flexibility of alamarBlue extends to practical advantages. Since alamarBlue is water-soluble, no washing/fixing or extraction steps are required. If it is not possible to read plates on the day the experiment was performed, you can refrigerate them in plastic or foil wrap and read them within 1–3 days, allowing you to read plates when convenient, which might help avoid long days in the lab!

Discover the Allure of alamarBlue

We have described three of the main reasons why we love alamarBlue and how it can add value to your cell proliferation experiments.  You can find more reasons why it can be a vital reagent to your lab, plus all of the tools you need to use alamarBlue on our dedicated resources page.