International Women’s Day is celebrated on 8th March all over the world to highlight the many achievements of women. To mark the occasion, in this blog, we take a look at three female scientists who have made major contributions to the antibody field. 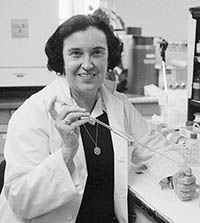 Rosalyn Sussman Yalow was the second woman to win the Nobel Prize in Medicine (awarded in 1977). Her discovery revolutionized medicine by enabling insulin to be measured in human blood plasma (Glick 2011).

In 1960, Rosalyn, together with Solomon Berson, developed the radioimmunoassay (RIA) technique at the Veterans Administration Hospital in the Bronx, New York, USA, to measure insulin in human blood plasma. Since its initial development, RIA has been used in a range of clinical applications, like analysis of hormones, therapeutic drug monitoring, and detecting infections such as HIV (Glick 2011).

In addition to receiving the Nobel Prize, Rosalyn was also the first woman to receive the Albert Lasker Basic Medical Research Award (1976), and in 1988 she was awarded the National Medal of Science by President Ronald Reagan. 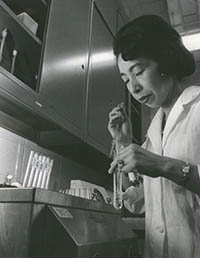 Teruko “Terry” Ishizaka, together with her husband, Kimishige “Kimi” Ishizaka discovered the IgE antibody class while working together at the Children's Asthma Research Institute and Hospital in Denver, USA in 1966. IgE is now known to be a central regulator of allergy and was the final antibody class to be discovered (the others are: IgA, IgD, IgG, and IgM). The importance of IgE to allergy has made it a major drug target from asthma to autoimmune diseases.

The Ishizakas speculated that a component of plasma - that wasn’t IgA - was able to transfer allergy to another person (Saito and Galli 2019). Identifying it was challenging due to its low concentration making it impossible to purify (Ishizaka and Ishizaka 2016). They called it ‘γE’ as it triggered an allergic reaction to the E antigen of ragweed pollen (Ishizaka and Ishizaka 2016). The protein was finally identified when scientists at Uppsala Univeristy, Sweden - Hans Bennich and Gunnar Johansson- isolated a novel protein (ND, named after the patient's initials) from a patient with myeloma that had almost identical properties to the Ishizakas’ ‘γE’ (Saito and Galli 2019). The research groups worked together and demonstrated that ND and ‘γE’ were the same protein and published a joint paper announcing the discovery of a new antibody class – IgE in 1968.

Terry and Kimi were jointly recognized for their discovery IgE and received several awards including the Passano Foundation Award in 1972, the Gairdner Foundation International Award in 1973, and the Borden Award in 1979. In 1990, Terry was also awarded the Behring-Kitasato Award (for the best immunologist in Japan of that year) for the first successful in vitro culture of human mast cells. 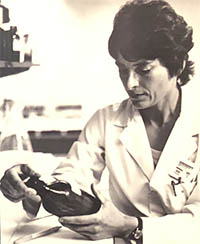 Eva Engvall’s research during her PhD in Peter Perlmann’s group, in Stockholm University, pioneered the development of enzyme-linked immunosorbent assays (ELISA). ELISAs are routinely used in numerous assays in clinics, as well as kits like home pregnancy and malaria tests.

RIAs were routinely used assays at the time but required radiolabeled reagents, expensive equipment, and specialized labs to protect from the harmful effects of radiation. Eva developed an alternative competitive method to RIAs that used an enzyme-based approach, rather than radiation, to quantify substances in 1970 (Engvall 2010).

The feasibility of ELISAs, as an alternative to RIAs, was demonstrated in a pivotal paper in 1971 by Eva and Peter Perlmann; in which they demonstrated quantitative measurement of immunoglobulins in rabbit serum by using alkaline phosphatase as the reporter (Lequin 2005).

Other research groups also independently demonstrated that enzymes could be used to quantitatively measure analytes. Stratis Avrameas and Guilbert at the Pasteur Institute in France measured serum immunoglobulin levels by coupling antigens or antibodies with enzymes. Anton Schuurs and Bauke van Weeman from the Organon Pharmaceutical laboratories in the Netherlands quantified human gonadotropin hormone in urine samples and published their technique, enzyme immunoassay (EIA) also in 1971 (Lequin 2005).

Eva's scientific career moved away from further ELISA assay development and focused on the biochemistry of tissues but she continued to use the ELISA assay for the rest of her career (Engvall 2010). Eva received several accolades for her contribution to science including an honorary degree from the University of Copenhagen in 1994, and the German scientific award of the "Biochemische Analytik" in 1976.

Bio-Rad was delighted to hear from Eva about her career and the importance that antibodies played:

“I love antibodies. My entire career has been based on antibodies, first ELISA and then monoclonal antibodies to discover, identify, and characterize novel tissue proteins.”

"It has been amazing to see how the ELISA has since its development been used in numerous important diagnostic tests. It highlights the importance of persevering as the initial proof-of-concept paper was difficult to publish with most rejections saying it contained nothing new." - Professor Eva Engvall

It is heartening to hear from Eva about how even the most transformative of developments in science are not always appreciated at first, as I am sure that many of our readers will have suffered from setbacks due to papers being rejected.  Perseverance and resilience are important skills for any scientist and I hope that this article serves as a source of inspiration for female scientists all over the world.

Influential women trailblazers have impacted our scientific community by undertaking some of the world's most complex problems. You can find out more trailblazing women in science, including Bio-Rad co-founder Alice Schwartz ​over on our social media channels #BioRadWomenInScience.

Photo Credits:  Image of  Rosalyn Sussman Yalow via Wikipedia and in the public domain.  Image of Teruko Ishizaka Photo By The Denver Post via Getty Images.  Image of Eva Engvall courtesy of Professor Eva Engvall.

In this blog, we discuss Porcine Reproductive and Respiratory Syndrome (PRSS)-resistant pigs and how this could help alleviate the economic burden of ...