For proper functioning and development of the human body, it is often necessary for cells to die. They typically die by a process called apoptosis, sometimes referred to as “cellular suicide”. Apoptosis helps to shape our organs and physical features before birth and rids the body of unneeded or damaged cells that could potentially cause harm. However, in some instances such as cancer, the apoptosis process can become hijacked, causing damaged cells to survive and grow uncontrollably. On the other end of the spectrum, apoptosis is sometimes hyperactive, thus killing more cells than necessary, for instance after a heart attack or stroke. Because the process is so critical to human health and development scientists have been interested in understanding the process and determining how to block or induce apoptosis in the appropriate disease context.

What causes a cell to induce apoptosis?

As a cell carries out its unique role in maintaining health, homeostasis or development, various triggers cause it to induce apoptosis. Sudden removal of the survival signals or disassociation from neighboring cells will cause a cell to initiate apoptosis. Moreover, increased cellular stress such as exposure to high heat conditions, DNA damage caused by irradiation/chemotherapy or pathogenic infection can also lead to cell death by apoptosis. In addition, some cells express death receptors, such as TNF-alpha, that induce apoptosis upon ligand binding or protein cross-linking.

What mechanisms lead to death by apoptosis?

When a cell experiences internal triggers such as DNA damage or loss of survival signals, this leads to activation of the intrinsic or mitochondrial apoptosis pathway. In contrast, when death receptors on the cell surface become activated upon encounter with a ligand, the extrinsic apoptosis pathway is activated (see image 1). 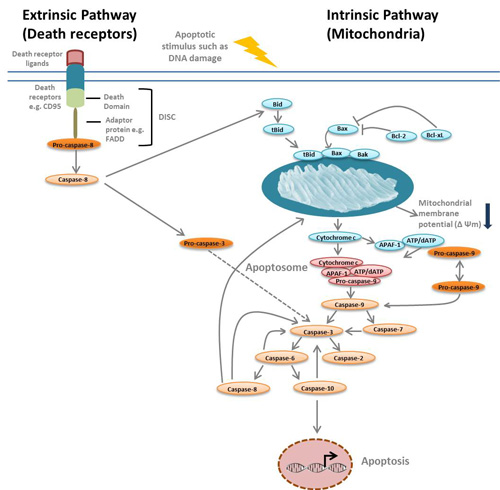 Image 1: Overview of the intrinsic and extrinsic apoptosis pathways

For the intrinsic pathway, if a cell experiences DNA damage for example, apoptosis is initiated in as little as two hours. The process starts with the activation of the apoptosis proteins Bcl-2 homologous antagonist or killer (Bak) and Bcl-2 associated X protein (Bax) by another apoptosis protein called BH3-interacting domain death agonist (Bid). These proteins then break down the “energy factory of the cell”, the mitochondria, by forming oligomers and inserting themselves into the oily outer mitochondrial membrane. They eventually form holes in the membrane, which leads to a decrease in mitochondrial membrane potential and the release of key proteins that go on to further drive the process of apoptosis (Westphal et al. 2014). Once the outer membrane of the mitochondria is permeabilized, apoptosis can no longer be reverted, and this is considered the “point of no return”.

A cocktail of lethal factors are released from the mitochondria once membrane integrity is compromised. One such factor is cytochrome c which binds to a cytoplasmic scaffold protein called apoptotic protease activating factor 1 (Apaf-1). This results in the formation of a quaternary protein structure called the apoptosome that amplifies the death response.

Activation of the extrinsic pathway through binding of specific ligands such as Fas ligand or tumor necrosis factor (TNF)-alpha to their corresponding death receptors Fas (also called CD95) or TNF receptor 1 (TNFR1, also called CD120a), respectively induces apoptosis by a different mechanism. Once activated, death receptors oligomerize and recruit caspase-8 and adaptor proteins such as FADD to form the death inducing signaling complex (DISC) at the C-terminal end of the death receptor. Caspase-8 is activated in the DISC complex and subsequently activates other caspases. However, caspase-8 can also activate the intrinsic pathway via its interaction with Bid (Kantari and Walczak 2011). Image 2. Jurkat cells were cultured in the absence (healthy) or presence (dying) of the apoptosis inducing drug staurosporine. Cells were stained with the Mitochondrial Membrane Potential MitoPT™ TMRE Kit (ICT946). TMRE aggregates in the mitochondria of non-apoptotic cells and fluoresces bright orange/red. However, in apoptotic cells the dye diffuses throughout the cell. Once dispersed, the reagent assumes a monomeric form and displays reduced orange/red fluorescence levels. This reduced intensity can be observed in the images labeled dying. Not only is the staining intensity reduced some cells show no staining at all.

The image on the right of dying Jurkat human T lymphocytes visually demonstrates morphological differences between healthy and dying cells. A cell dying by apoptosis initially shrinks and becomes rounded, a process mediated by caspases. The cell surface changes and the cytoskeleton detaches from the plasma membrane. As a result bulges/protrusions become visible for a short period of time (a phenomenon known as membrane blebbing). This is followed by nuclear condensation and destructive fragmentation of the DNA present in the nucleus. The cell eventually separates into cell fragments called apoptotic bodies during a process referred to as “budding” (Elmore 2007). The journey of an apoptotic cell often ends with the engulfment of apoptotic bodies by macrophages.

How is apoptosis measured in cells?

Several tools and reagents are currently available for measuring the different stages of apoptosis described. For instance microscopy techniques such as live cell imaging can be used to visualize phenotypic changes in the apoptotic cell, including membrane blebbing. Detection of caspase activity by western blotting or by using fluorescently labeled inhibitors of caspases (FLICA™) can also be used to detect cells in the early stages of apoptosis. Measuring the critical decrease in mitochondrial membrane potential is another method for detecting early apoptotic cells. Rearrangements of the plasma membrane phospholipid asymmetry in apoptotic cells can be measured using kits such as the pSIVA™ Real-Time Apoptosis Fluorescent Microscopy Kit and Annexin V Kits. DNA fragmentation, which occurs during the late stages of apoptosis can also be visualized using TUNEL (for Terminal deoxynucleotidyl transferase dUTP Nick End Labeling) assays. Scientists often utilize multiple assays to confirm and measure apoptosis during their research.

For more information on apoptosis and advice on apoptosis assay selection, check out our webinar “A question of life or death”— differentiating between healthy and apoptotic cells.

Guest contributor, Marta González-Prieto shares her love story with her PhD project and how despite initial challenges they eventually got the happy e...