The Importance of Phosphorylation Events in Cancer

When cell signaling goes wrong, the consequences can be disastrous. Dysregulation of cell signaling pathways can confer changes such as immortality, or inappropriate proliferation, plus other factors that promote transformation to cancer cells.

This blog discusses phosphorylation in the regulation of signal transduction pathways and the role of aberrant kinase function in cancer.

An Important Regulator of Signal Transduction

It is estimated that around 1/3rd of all human proteins may be modified by kinase activity, with over 500 protein kinases known in humans (Ardito et al. 2017). The addition of a phosphate group to threonine, tyrosine, or serine residues by a protein kinase is an important mechanism for regulating protein function. Phosphorylation is a reversible process with phosphatases removing the phosphate group. In this way, phosphorylation can act as a molecular switch to modify the activity of the protein, facilitate interactions with other proteins, or lead to translocation of a target protein to a different part of the cell (Table 1).

Due to its ability to modify protein functions, phosphorylation is crucial to the regulation of signal transduction pathways. Mitogen-activated protein (MAP) kinase pathways are an example of the role that phosphorylation can play in relaying a signal to bring about changes in cell function (Morrison 2012). Activation of MAP kinase pathways leads to a cascade of phosphorylation events, during which one kinase in turn phosphorylates and activates another kinase. Ultimately, this leads to transcription of genes that modify cellular growth and differentiation (Figure 1). 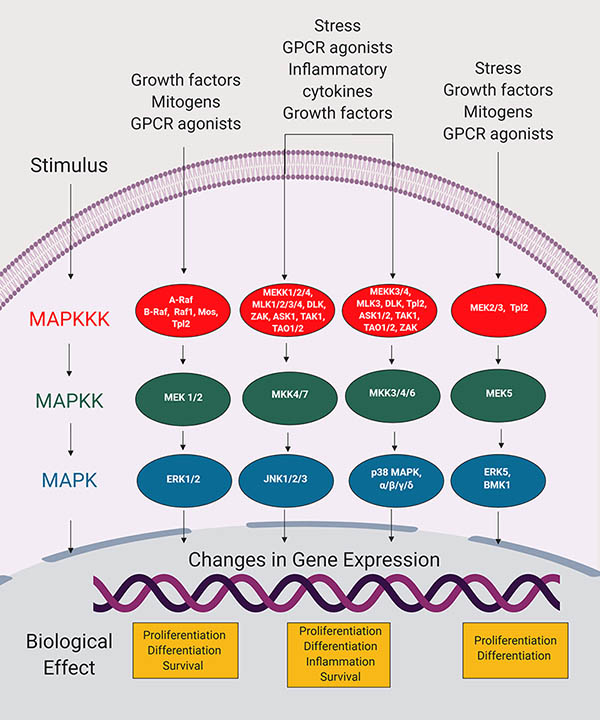 The balance can be shifted from a normal cell to a cancer cell by the acquisition of traits that confer distinctive properties, termed the hallmarks of cancer. These include sustained proliferation, avoiding the immune response, resisting cell death signals, acquiring replicative immortality, activating angiogenesis, avoiding growth suppression signals, and activating invasion and metastasis (Hanahan and Weinberg 2011). Due to the role that many kinases play in regulating signaling pathways that promote cell proliferation, survival, and migration, inappropriate kinase activity (like hyperactivity, malfunction, or overexpression) can lead to dysregulation of signaling pathways and transformation to a cancer phenotype (Ardito et al. 2017).

Kinases with modified behavior are frequently associated with different cancers (Harsha and Pandey 2010). Over 1,000 variations in the expression of protein kinases have been identified in human tumor samples and many of these kinases are now considered cancer biomarkers (Ardito et al. 2017). For example, in chronic myelogenous leukemia (CML), a fusion BRC-ABL1 gene gives rise to a constituently active tyrosine kinase that drives uncontrollable cell division and CML.

The L858R point mutation in the EGF receptor (EGF R) tyrosine kinase domain (exon 21) leads to constitutive activation of this kinase and phosphorylation of the EGF R carboxyl tail that is independent of receptor binding. This mutation is frequently found in non-small cell lung cancer patients (Sharma et al. 2007).

Phosphorylation is crucial for the activation of many key regulatory proteins, including p53. p53 is central to DNA damage repair and co-ordinates transcription of genes involved in inhibiting the cell cycle, activation of DNA repair and, if necessary, apoptosis. Dysregulation of p53 phosphorylation can cause its inappropriate activation, and can promote transformation to a cancer cell (Ardito et al. 2017).

A Target for Cancer Therapy

Our understanding of the involvement of kinases in cancer development has led to a concerted research effort into developing therapeutic kinase inhibitors (Ferguson and Gray 2018). Around 150 kinase inhibitors are in preclinical or clinical trials, and several have already been licensed (Bhullar et al. 2018). These include antibodies like cetuximab (Erbitux) indicated for certain types of colorectal cancer and head and neck cancer, and trastuzumab (Herceptin) indicated for HER2-overexpressing breast cancer.

Many kinases phosphorylate multiple targets, therefore inhibiting them can lead to off-target effects and this complicates this therapeutic approach. Additionally, kinase inhibition can lead to cells acquiring resistance to treatment through selective pressure. Imatinib (Glivec) is a small molecule inhibitor of Abl, that is licensed for the treatment of CML. Imatinib resistance can arise due to mutations in Thr315, which impact the ability of imatinib to access the binding pocket (Bhullar et al. 2018).

This blog tells the story of rapamycin’s discovery, identification of the mTOR signaling pathway, and highlights the important role that basic researc...

The HisTORy behind the Discovery of Rapamycin