The HisTORy behind the Discovery of Rapamycin

The fascinating story behind the discovery of mTOR signaling began during a scientific expedition to discover new antimicrobial agents. This blog tells the story of rapamycin’s discovery and highlights the important role that basic research plays in translational medicine.

An Expedition to Easter Island

Easter Island is most notable for its Moai statues, but the island also played an important part in the discovery of the mTOR signaling pathway. Rapamycin, marketed under the name sirolimus, is a macrolide compound with immunosuppressive functions and was first isolated from samples brought back from Easter Island by a microbiologist called Georges Nógrády.

Georges Nógrády was trying to understand why the inhabitants of Easter Island, despite walking around barefoot, didn’t get tetanus; tetanus is common in locations like Easter Island where lots of horses roamed. During an expedition to Easter Island in 1964, he collected samples of the soil from different parts of the island to see if he could uncover the answer (Kahan 2003). He had limited success at finding tetanus spores in the samples that he had collected but, rather than discarding the soil, he gave the samples to scientists studying medicinal compounds made by bacteria, at Ayerst Pharmaceuticals - now Pfizer (Kahan 2003).

The Ayerst Pharmaceuticals team was able to identify a new antifungal compound in the soil samples that was produced by the bacterium Streptomyces hygroscopicus (Figure 1). This compound inhibited Candida albicans, Microsporum gypseum, and Trichophyton granulosum (Vézina et al. 1975). In homage to the location that S. hygroscopicus had originated from, it was named after the Polynesian name for Easter Island, Rapa Nui, and called rapamycin (Sabatini 2017). 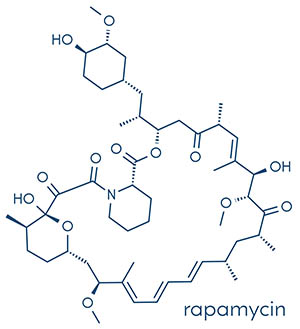 Rapamycin’s eventual development into a clinical compound (Rapamune), used to prevent organ transplant rejection and treatment for some cancers, was spearheaded by one of the Ayerst Pharmaceuticals team members - Dr Surendra Sehgal (Samanta 2017). Dr Sehgal was initially developing rapamycin as an antifungal drug until it became apparent that rapamycin also had immunosuppressive activity (Garber 2001).

Dr Sehgal also believed that rapamycin possessed novel properties beyond its immunosuppressive activities and sent samples of S. hygroscopicus to the U.S. National Cancer Institute (NCI) so they could isolate rapamycin for screening. Excitingly, rapamycin demonstrated incredible anti-tumor activity against many of the solid tumors tested, leading to it being designated a priority drug by NCI (Garber 2001).

However, rapamycin development was halted when Ayerst Pharmaceuticals consolidated research facilities in 1982. It was six years later that Dr Sehgal was able to convince the now merged Wyeth-Ayerst to resurrect the project and start investigating rapamycin again as an immunosuppressant (Garber 2001).

Identification of the mTOR Signaling Network

In the intervening years, while rapamycin development by Ayerst Pharmaceuticals was on hold, rapamycin’s mechanism was a subject of interest for many research groups. The target of rapamycin was independently identified by different groups and in various organisms. Michael Hall (University of Basel, Switzerland) was able to clone the molecular target of rapamycin from budding yeast and called it TOR (target of rapamycin), while George Livi (GlaxoSmithKline, Pennsylvania) found the same genes and called them DBB (Garber 2001). Stuart Schreiber (Harvard University, USA), David Sabatini (John Hopkins University, USA), and Robert Abraham (Mayo Clinic, USA) identified the target and named it RAFT/FRAP/ mTOR (Sabatini 2017). The name that eventually stuck was after the rapamycin target in mammalian cells, which was designated mammalian TOR, mechanistic TOR, or mTOR, due to the sequence homology with the target protein found in budding yeast (Sabatini 2017).

Over time, considerable research efforts have expanded our knowledge of mTOR and many regulators and effectors of mTOR have been discovered, revealing a major new eukaryotic signaling network.

Since the discovery of mTOR, our understanding of this protein and its related signaling pathways have grown significantly; mTOR signaling is now known to be a central regulator of cell growth, proliferation, metabolism, and survival (Sabatini 2017). mTOR signaling is activated during cellular processes like tumor formation and angiogenesis, and it is deregulated in diseases including cancer and type 2 diabetes. This key role in cancer means that the oncogenic processes of mTOR are inhibited by rapamycin and additional mTOR inhibitors, and inhibitors of other protein kinases have also been developed as anti-cancer drugs. As an ironic twist, Dr Sehgal, one of the original discoverers of rapamycin, passed away from metastatic colon cancer in 1998 but before his death, he received treatment with Rapamune - the very drug that his lifetime’s work had contributed to -  and he was pleased that it was able to extend his life (Samanta 2017).

As well as its role in many disease pathways, more recent studies in mice and other species suggest that mTOR signaling may play a role in aging and could control the effects of dietary restriction on lengthening lifespan, and slowing the onset of age-related diseases (Stallone et al. 2019). Accordingly, rapamycin has been found to prolong life and slow age-related pathophysiology in a range of species. If similar results are seen in humans, the implications on lifespan and age-related health would be significant. This central role in so many important cellular processes means that mTOR signaling looks set to remain an important focus of clinical research for some time. 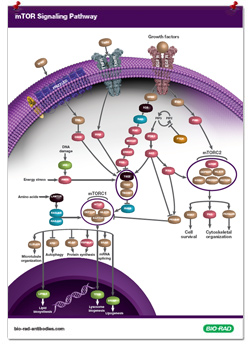 Bio-Rad has highlighted the key proteins
involved in mTOR signaling in our
downloadable poster.

Seto B (2012). Rapamycin and mTOR : a serendipitous discovery and implications for breast cancer. Clin Transl Med 1, 29-35.

This blog discusses phosphorylation, a common regulator of signal transduction pathways and the role of inappropriate phosphorylation events in cancer...

The Importance of Phosphorylation Events in Cancer