Every so often scientists discover something that completely challenges our understanding of how the body works. It turns out that what we once thought about how the immune system functions is not completely accurate. It has traditionally been taught that one of the main distinguishers between the innate and adaptive immune responses of the immune system is the capacity to generate immunological memory. Innate immune cells were stated to lack this ability, whereas the T and B-cells of the adaptive immune response were known for their ability to generate long-term immunological memory that enables a more robust response upon secondary encounter with a pathogen. However, this is not entirely the case (see image below for a hint), and immunology textbooks now need to be rewritten to include the concept of “trained immunity”. 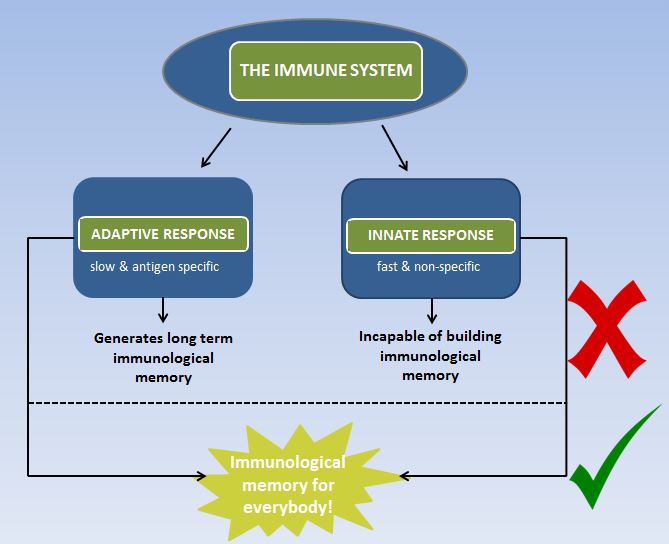 Trained immunity, a term coined by Mihai Netea MD PhD and colleagues at Radboud University Nijmegen Medical Center, refers to immunological memory generated by cells of the innate immune system. This term describes the phenomenon that innate immune cells such as macrophages, dendritic cells, and natural killer cells can actually “remember” pathogens and confer protection against a secondary infection through mechanisms independent of adaptive immune responses (Netea M et al. 2015). It should be noted that the memory response defined by trained immunity indicates an enhanced response to a secondary infection of the same pathogen as well as a different one, which is in contrast to the classic specificity of the adaptive immune memory response to the same pathogen.

Our understanding of this recently discovered capacity of the mammalian immune system is based on studies performed in plants and invertebrates which lack an adaptive immune compartment. One of the first studies to directly demonstrate the existence of innate immune memory in invertebrates was conducted by Joachim Kurtz and colleagues (Kurtz and Franz, 2003) using the copepod Macrocyclops albidus (a minute crustacean). The copepod became resistant to subsequent infections of its natural pathogen, the parasitic tapeworm Schistocephalus solidus following initial exposure. Evidence of trained immunity in vertebrates was pioneered by epidemiological observations. For example, BCG vaccination, which protects against tuberculosis, of West African children was shown to protect against infections other than tuberculosis, thus reducing overall mortality (Garly et al. 2003). Experimental support of this epidemiological finding was derived from in vivo studies showing that BCG vaccination protected mice against secondary infection with Candida albicans or Schistosoma mansoni. This protection was mediated through T-cell independent mechanisms (Tribouley et al. 1978) and involved activated tissue macrophages (Van ‘t Wout MJ et al. 1992).

The concept of trained immunity certainly blurs the line that once neatly separated the vertebrate immune system. However, it has been shown that the mechanisms by which innate immune cells induce immunological memory vary distinctly from those of adaptive immune cells. Adaptive immune memory is specific, antigen dependent and mediated by gene rearrangement. On the other hand, immunological memory induced by innate immune cells is less specific, antigen independent and is mediated through epigenetic reprogramming and DNA methylation (Pacis A 2015). Emerging evidence also suggests that trained immunity has a shorter duration than adaptive immunity.

This new understanding of how the immune system functions represents a paradigm shift in innate immunity research, indicating the emergence of a new area of study that promises a better understanding of host defense and the development of novel immunotherapeutic approaches. Future studies are focused on understanding the mechanisms that mediate trained immunity, including how long it persists for and whether innate immune memory can be transmitted epigenetically in the germline, something that is known to occur in plants.