Like all power couple relationships, tandem dyes provide added benefit, as they allow for more markers to be evaluated in a single experiment. When you need to study multiple markers simultaneously, you’ll find that choosing appropriate fluorophores requires careful consideration and planning. You’ll also realize that tandem dyes most likely will have to be included in your multicolor panel. This is due to both laser excitation and single fluorophore limitations, which make it necessary for a single laser to excite the maximum number of fluorophores possible.

In a power couple, each entity is ideal on their own but together they make the world better and so is the case with tandem dye power couple fluorophores… at least in the world of flow cytometry. The tandem dye consists of two different covalently attached fluorophores, a donor and an acceptor molecule. In a process known as Förster resonance energy transfer (FRET; also known as Fluorescence resonance energy transfer), energy is passed on from an excited donor to the acceptor molecule, which then emits a photon of light.

The first set of tandem dyes were generated using PE and APC fluorophores as donors in the late 1980s and mid-1990s, respectively. The subsequent revolutionary increase in tandem dyes, as well as additional lasers during this period led to the advancement of multicolor flow cytometry (≥ 6 colors), and currently up to 11 bands of detection wavelengths can be analyzed using tandem dyes in your multicolor panel (Bendall et al. 2012). This is primarily due to the increased emission range allowed by tandem dyes from a single laser. So do you have a lot of markers to analyze? Distinct cell populations to identify perhaps? Then tandem dye conjugates will certainly be useful to you.

Power couples can however be high maintenance and so it should come as no surprise that tandem dye conjugates require a little more attention than their single fluorophore counterparts. Here are some guidelines for using tandem dye conjugated antibodies:

Check out our array of tandem dye conjugates including our exclusive Alexa Fluor® tandems for your multi-color panel needs. 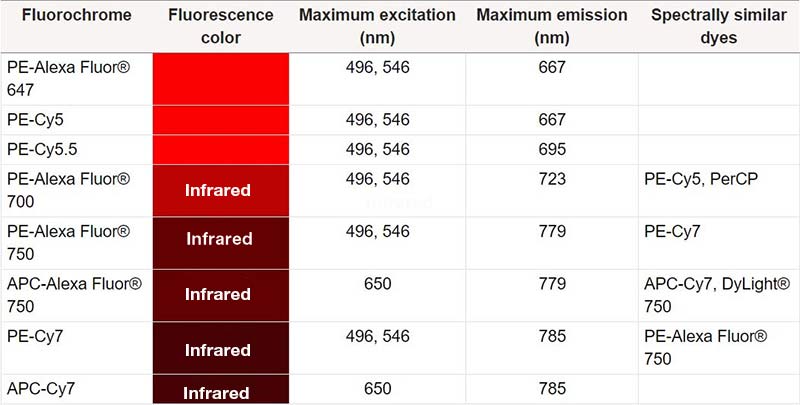 Alexa Fluor® is a registered trademark of Molecular Probes Inc. OR, USA.
DyLight® Fluor is a trademark of Thermo Fisher Scientific Inc. and its subsidiaries.