In this guest blog, Sabine Hahn, a researcher who focuses on the dynamic regulation of chromatin structure and how that influences chromosome segregation during mitosis, discusses the retinoblastoma tumor suppressor protein (pRB) and its vital role in cancer epigenetics.

pRB, is a well-studied tumor suppressor that plays a pivotal role in coordinating the cell cycle and is most appreciated for its interaction with E2F1 (Weinberg 1990). pRB is lost or functionally inactivated in nearly all cancers (Burkhart and Sage 2008). In cancer cells, pRB is inactivated by heavy phosphorylation which disrupts pRB’s negative regulation of E2F1, permitting E2F1-dependent transcription to push cells through uncontrolled proliferation (Goodrich 2006).

More recently, we’ve come to realize that pRB’s function extends beyond its regulation of E2F1 as E2F1 is only one of 350+ proteins pRB interacts with (Dyson 2016, Sanidas et al. 2019). pRB is fundamentally important to many cellular programs including cell division, stress response, senescence and death, differentiation, and more (Figure 1) (Dick et al. 2018, Goodrich 2006). Nonetheless, we need a clearer picture of which of these hundreds of interactions is important for each of these functions. 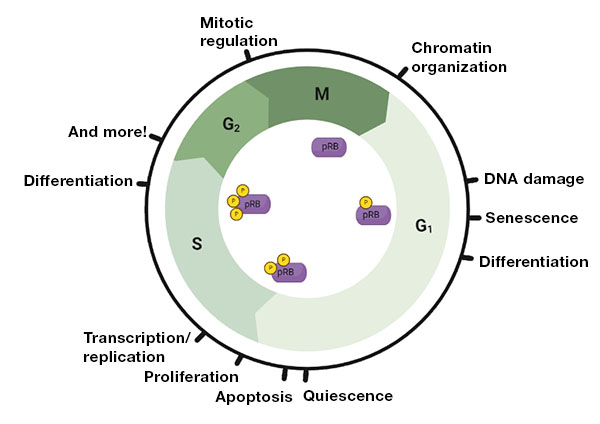 Fig. 1. pRB’s many roles and phosphorylation status throughout the cell cycle.

A Role in Chromatin Regulation

One of the many ways pRB regulates gene expression is through the modulation of chromatin structure. Chromatin structure can be influenced by histone posttranslational modifications (PTM) that alter the accessibility of genetic materials, the binding capability of transcriptional regulators, and the integrity of important chromatin boundaries (Gonzalo et al. 2005, Longworth and Dyson 2010). Of course, pRB-E2F interactions are extremely important, but, of the hundreds of other proteins in pRB’s interactome, 20% are histones and histone modifiers!

Many of the epigenetic proteins that interact with pRB do so through an LXCXE sequence that is recognized by a motif on pRB located outside of the pRB-E2F interaction domain (Figure 2) (Dick et al. 2000, Guzman et al. 2020). The LXCXE binding site has proven itself to be wildly important to maintaining a healthy cell. While disruption of the LXCXE binding site does not prevent pRB-E2F interactions, it is required for completely unperturbed pRB functionality (Chan et al. 2001, Isaac et al. 2006). 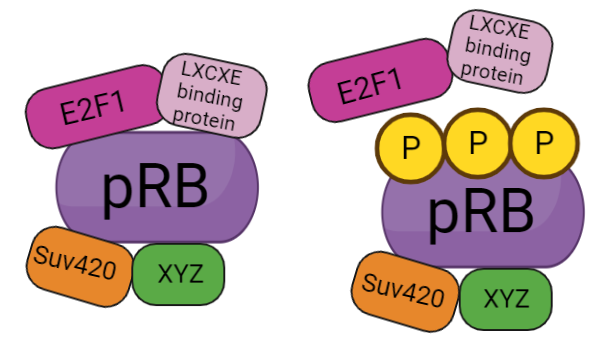 Fig. 2. Phosphorylation-dependent and independent interactions with pRB. The binding site lies right outside the pRB-E2F interaction domain. Proteins containing an LXCXE motif, such as HP1 and HDAC, can bind independently or in conjunction with E2F or other recruitment, corepressor, and chromatin remodeling proteins. Unlike the pRB-E2F interaction domain and LXCXE domain, other binding sites may not be impacted by pRB in its phosphorylated state.

pRB interacts with chromatin modifying proteins known as histone deacetylases (HDAC) through this domain, either alone or through other proteins in a complex (Talluri and Dick 2012). These interactions allow HDACs to change chromatin structure by removing acetyl groups on histone tails. Deacetylation tightens chromatin by increasing the interactions between DNA and histones and impacts transcription by limiting how accessible the DNA is (Guzman et al. 2020, Talluri and Dick 2012). The pRB-HDAC interaction encompasses many roles such as transcriptional repression and the promotion of differentiation.

To add to pRB’s complexity, pRB-HDAC has even been shown to serve as an activator for further interactions between pRB and other epigenetic proteins such as Suv39, a histone methyltransferase, as well as Heterochromatin Protein 1 (HP1) (Uchida 2016). A functional LXCXE binding domain is required for interactions with proteins such as HDAC and HP1 (Talluri and Dick 2012). Unfortunately, not unlike the pRB-E2F interaction, LXCXE is not immune to the sustained hyperphosphorylation often found in cancer. Loss of a functional LXCXE binding domain has been found to cause defects in mitosis and increase rates of chromosomal instability and oncogenesis (Coschi et al. 2010).

Other epigenetic proteins, such as Suv420, are impervious to pRB’s phosphorylated state after the G1/S phase transition by interacting with pRB outside of the LXCXE binding domain (Gonzalo et al. 2005, Longworth and Dyson 2010). Suv420 is a histone methyltransferase that di- and tri-methylates Histone 4 Lysine 20 (H4K20) (Gonzalo et al. 2005). Heterochromatin is particularly enriched in methylated H4K20 later in the cell cycle to protect faithful chromosome segregation during mitosis.

During cell division, epigenetic mechanisms such as this one play a vital role in creating and regulating the centromere and, ultimately, the kinetochore that are responsible for linking proper chromosome attachments to the mitotic spindle. Defects in this regulation can corrupt these attachments resulting in chromosome segregation errors that can easily lead to the loss or gain of chromosomes and, potentially, cancer (Herlihy et al. 2021). Many have suggested that Suv420’s activity during S-phase is not sensitive to pRB phosphorylation during the G1/S-phase transition (Isaac et al. 2006, Schotta et al. 2004). This means that loss of pRB-E2F interactions do not prevent pRB from promoting Suv420-dependent H4K20 trimethylation; however, this also shows that the impact of pRB loss – especially in cancer – is much more nuanced than corruption of the G1/S phase transition (Dick et al. 2018).

The loss of pRB itself has been shown to decrease H4K20 trimethylation and cause genomic instability and chromosomal defects due to abnormal cohesion between sister chromatids and mis-regulated centromere structure (Fraga et al. 2005, Gonzalo et al. 2005). Interactions like this one, between Suv420 and pRB, would be maintained when pRB is hyperphosphorylated; however, this may also explain why complete loss of pRB, instead of just inactivation by phosphorylation, is common in a subset of cancers.

A newfound appreciation lies in whether pRB loss in many cancers results from genetic or regulatory mechanisms, such as hyperphosphorylation, and wherein the oncogenic advantage lies. What helps a potential cancer cell become a cancer cell? What might help a cancer cell become an aggressive cancer cell? Epigenetic deregulation has a variety of clinical implications that result in an aggressive cancer phenotype. HDACs are often overexpressed in cancer and their deregulation leads to excessive cell growth, chromosomal instability, and tumor transformation (Jung et al. 2012, Ropero and Esteller 2007). Suv420 and methylated H4K20 have been shown to be deregulated in cancer (Herlihy et al. 2021, Yokoyama et al. 2014). Suv420’s role in methylation is especially important for maintaining the DNA damage response pathway and the structural integrity of the heterochromatin that helps define the critical regions of chromatin like the centromere and telomere (Gonzalo et al. 2005, Schotta et al. 2008). Loss of H4K20 trimethylation has been implicated in poor prognosis and increased invasiveness of cancer cells (Yokoyama et al. 2014).

Aside from histone PTMs being utilized as prognostic markers, the enzymes that place them have been identified as potential targets in cancer therapy (Watanabe et al. 2008, Yokoyama et al. 2014). Targeting the epigenetic deregulation that stems from pRB loss in cancer might very well be a promising therapeutic approach. While pRB-E2F interactions are undeniably important, it’s clear that pRB plays a much more complex role in cancer.

Take a look at our mini-review “Understanding the Eukaryotic Cell Cycle” to learn more about checkpoints, regulation, and useful techniques for evaluating proliferating cells.

In this guest blog, Grace Gregory discusses Non-small Cell Lung Cancer (NSCLC), some of the different treatment approaches being used, and why finding...