On our 9-month journey to Earth, we traveled with a specialized carry-on that provided for our daily needs and helped us hitch a smooth ride on the mothership. This unique accessory is the placenta, an essential organ that acts as an interface for physiological exchange and signaling between mother and fetus.

The Development of the Placenta

The development of the placenta begins when a group of cells from the blastocyst attach to the uterine surface and fuse to create a multinucleated mass called the synctiotrophoblast (doesn’t that sound a wee bit alien to you?). The synctiotrophoblast is an invasive syncytium that eventually forms the main site for gaseous and nutrient exchange between maternal and fetal blood (Herrick and Bordoni 2021). How this is formed is not unlike the docking and colonization sequence of a little space hitchhiker (Figure 1). 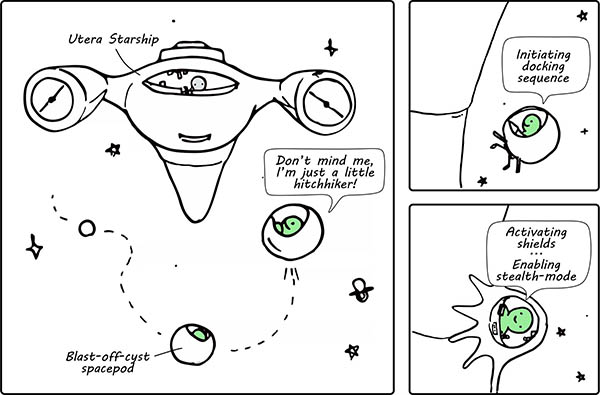 Incidentally, the early stages of placental development also occur in a physiologically hypoxic environment (Caniggia et al. 2000). To make the new base more hospitable, the implanted blastocyst undertakes some major renovations. This includes “planting” villous trees, which not only anchor the placenta to the decidua (the modified uterine endometrium that is prepared for pregnancy), but also functions to create a large surface area for exchange with maternal circulation (Figure 2). At the same time, maternal spiral arteries are remodeled to hijack mothership supplies and increase blood flow to the rapidly growing placenta (Turco and Moffett 2019).

Fig. 2. A comic to illustrate the developing fetus and placenta in the womb. The functional units of the placenta, which are the chorionic villi, are shown. The right-hand panel depicts the basic structure of the maternal and fetal circulatory system at the placenta. A little green figure is shown to be watering the trees for humoristic purposes.

To remain stealthy in the presence of patrolling maternal immune cells, our allogeneic “alien hitchhiker” ensures that the syncytium does not express human leukocyte antigens (HLA) (Moffett and Loke 2006). The mothership is very much aware of its little intruder though, and the development of maternal immune tolerance of the fetus is required for a successful pregnancy (Abu-Raya et al. 2020).

The fetus’ protective shield is also strengthened with the help of an ancient viral protein called syncytin, which mediates the fusion of underlying cytotrophoblast cells to the synctiotrophoblast (Mi et al. 2000). Without extracellular space between cell borders, the syncytium becomes more difficult to trespass by pathogens (Zeldovich et al. 2013) (Figure 3). 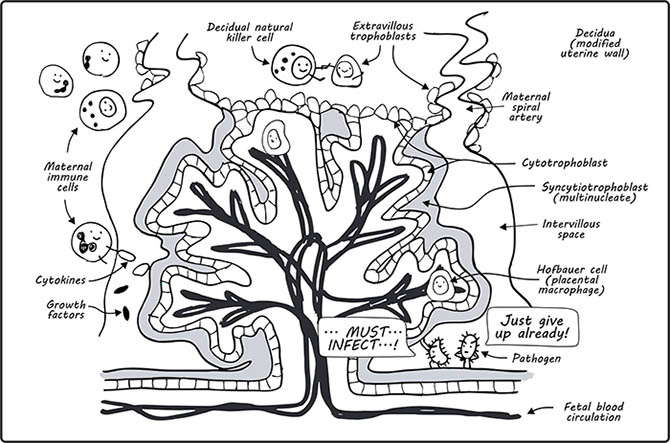 Fig. 3. A comic to show the villous tree. Image adapted from Del Gobo et al. 2020. The villous tree including the outermost syncytiotrophoblast (in grey), which is a multinucleate syncytium, and the cytotrophoblasts, which form a continuous layer beneath the syncytiotrophoblast as well as a shell that is in direct contact with the decidua. Maternal and fetal immune cells are also shown. Bacterial pathogens make a guest appearance as a frustrated duo that cannot pass the physical barrier created by the syncytium.

By birth, the placenta weighs 1/6th of our birth weight and is just less than half our body length. It’s also shaped like a flying saucer, where it’s thickest at the center (~3 cm) and tapers out at the edges (just pointing out the UFO in the delivery room here) (Herrick and Bordoni 2021).

Even more bizarre is the sheer number of somatic mutations harbored by normal placental tissue at term, where whole-genome sequencing of bulk placental samples revealed that they are akin to a pediatric tumor (Coorens et al. 2021) (How mind blowing is that?). 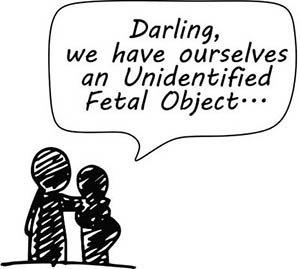 The Protective Role of the Placenta

Apart from sustaining the growth of the fetus, the placenta also responds to “turbulence” that might affect the well-being of the mother, and by (umbilical) extension, the fetus (Figure 4). This might include a variety of factors, such as genetics, stress, and lifestyle. Exposure to these maternal insults have been associated with lower birth weight, as well as an increased risk of infections and neurodevelopmental disorders in childhood (Burton et al. 2016). Therefore, despite being a temporary organ, the biochemical transactions regulated by the placenta can exert lifelong effects on both mother and child (Walsh et al. 2019).

Fig. 4. A comic to show how the placenta buffers the developing fetus against environmental factors that affect the physiological state of the mother.

While this highlights the need for research in the field, human pregnancies do not present a straightforward experimental system to study the placenta. The diversity of placental structures across mammalian lineages also limits the utility of animal models (Enders 2009). Nevertheless, scientists can learn a lot about placental function from studies involving paired maternal, fetal, and placental samples, the latter of which is similar to a black box of in utero exposures.

To give an example, a study investigating the transmission of SARS-CoV-2 via the placenta has shown that a low percentage (~5%) of babies born to COVID-19 infected mothers test positive. This indicates possible protective mechanisms by the placenta against SARS-CoV-2 to the fetus (Rad et al. 2021). Nevertheless, further studies are needed to understand the higher risk of pregnancy complications reported in COVID-19 infected mothers (Gajbhiye et al. 2020).

Additionally, the ongoing pandemic has led to a significant increase in depression and anxiety symptoms in pregnant women (Ahmad and Vismara 2021). This is concerning because existing evidence suggests an intimate link between maternal stress and adverse fetal outcomes.

One example of how this might occur is the upregulation of the placental enzyme 11 beta-hydroxysteroid dehydrogenase type 2 (11β-HSD2) under acute maternal stress, which transforms biologically active cortisol (a primary stress hormone) into inactive cortisone (Murphy et al. 1974). In this way, the placenta buffers the fetus against high levels of cortisol in the circulating plasma, which is known to compromise fetal growth (Ghaemmaghami et al. 2014). However, studies in rodents have shown that exposure to chronic stress overpowers this protective ability of placenta, which then fails to upregulate 11β-HSD2 in the face of an acute stressor (Welberg et al. 2005).

Another likely mechanism concerns the epigenetic regulation of gene expression in placental tissue. This is of considerable interest given the placenta’s comparatively hypomethylated DNA methylation profile (Schroeder et al. 2015). For example, brain derived neurotrophic factor (BDNF) gene methylation was found to be associated with chronic stress and war trauma in placental samples from the war-torn region of the Democratic Republic of Congo (Kertes et al. 2017). This might affect signaling pathways in fetal development because BDNF is a neurotrophin that plays a well-characterized role in neuroplasticity, as well as distinct roles in pregnancy (Christian et al. 2016).

The link between maternal state and fetal development may also be explained by direct placental transfer of proteins such as BDNF. A recent study showed that elevated maternal serum BDNF is associated with anxiety symptoms in the mother of boys (such sex-specific differences are thought to be the result of inherent differences in placental sex) (Bale and Epperson 2015, Dingsdale et al. 2021). Yet, studies using a transgenic mouse model provided evidence that serum BDNF does not appear to be transferred across the placenta. This hints that the placenta might protect the developing fetus from maternal anxiety-driven elevations in serum BDNF.

All in all, it is known that the placenta plays an incomparable role in the propagation and wellbeing of our species, but exactly how it navigates through turbulent times will remain alien to us for a foreseeable future.  So, before we embark on a cross-generational cruise to colonize a new planet, it’s probably in our best interest to understand the ins and outs of this indispensable organ.

(No worries there, because when you arrived on Earth, a star was born.)

Bio-Rad has a range of antibodies against a number of stem cell markers to help you study this important developmental stage.

Caniggia I et al. (2000). Oxygen and placental development during the first trimester: Implications for the pathophysiology of pre-eclampsia. Placenta 21, S25-S30.