In this guest blog, Priyankaa Pitcheshwar, a PhD student working in the area of adenosine-to-inosine (A-to-I) RNA editing in the context of cancer, tells us about the hopes of targeting this mechanism for disease treatment.

The flow of genetic information within cells is described by the central dogma of molecular biology: DNA gives rise to RNA and RNA culminates in protein production. RNA is a short-lived molecule playing a crucial, albeit intermediary role, serving as the blueprint for protein production. Its function and stability are controlled by innumerable modifications, each holding a specific purpose (Roundtree et al. 2017).

A-to-I editing is the most prevalent and well-studied RNA modification in mammals and an epitranscriptional mechanism essential for normal development (Goldstein et al. 2016). It confers transcriptomic and proteomic diversity by adding an additional layer of complexity to gene regulation. Intriguingly, this dynamic transcriptomic fine-tuning has been reported to offer an adaptive advantage in responding to environmental conditions (Yablonovitch et al. 2017).

In fact, it is such a ubiquitous process that transcriptomes are modified in this way from cellular organelles including chloroplasts and mitochondria, eukaryotic drosophila and nematodes, to primates and mammals, highlighting its evolutionary significance.

A-to-I RNA editing is orchestrated by the ADAR family of proteins, primarily ADAR1 and ADAR2, and it follows a precise mechanism. ADARs are required to homodimerize for which a double stranded RNA substrate is required. This acts as an ideal platform for ADARs to perch on and catalyze the deamination reaction. The vast majority of editing sites are embedded in the introns and untranslated regions, which are home to Alu repetitive elements that assemble into a well-structured landscape, optimal for A-to-I editing (Peng et al. 2012).

The specific adenosine is flipped out of the structure into a catalytic pocket whereby it undergoes a hydrolytic deamination resulting in an inosine molecule. (Matthews et al. 2016). The cellular machinery recognizes inosines (I) as guanosines (G) owing to structural similarities between them (Figure 1). Extensive research over the years has unraveled the poor correlation between editing frequencies and levels of ADAR enzymes thereby prompting the involvement of secondary regulators in fine tuning this process (Freund et al. 2020).

Fig. 1. ADAR enzymes catalyze the hydrolytic deamination reaction, wherein an adenosine residue loses an amine group and gets converted to inosine, which is recognized by the cellular machinery as guanosine.

Impressively, a single nucleotide change can have a number of downstream implications (Figure 2). Editing in the exonic regions can cause amino acid changes that influence protein structure and stability. RNA-binding proteins (RBPs) are key regulators of several RNA-driven processes. Their binding can be affected by exonic as well as intronic editing. Splice site alterations can result in impaired splicing patterns giving rise to differential isoforms. Cellular homeostasis can go haywire with 3’ UTR editing events that could perturb miRNA-mediated degradation of biologically important transcripts (Zhang et al. 2016). Besides mRNA, other RNA species such as miRNA (Marceca et al. 2020) and tRNA (Torres et al. 2014) are also prone to rampant A-to-I editing. 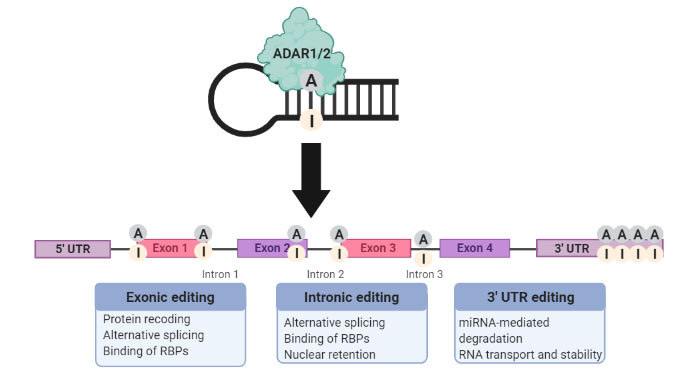 Fig. 2. Downstream implications that result from A-to-I RNA editing categorized based on the genomic location of the deamination reaction.

ADARs-mediated RNA editing drives the development and progression of several malignancies in a context-dependent fashion (Xu et al. 2018). A well-characterized A-to-I editing event is the ADAR2-mediating recoding of PODXL (podocalyxin-like) in gastric cancer. In this instance, the substitution of the amino acid histidine by an arginine at codon 241 of PODXL conferred a loss-of-function phenotype that offsets the tumorigenicity of the unedited version of PODXL (Chan et al. 2016). Another interesting example is the editing of miR-455-5p, wherein the hypoedited version suppresses melanoma growth and metastasis by inhibiting the miRNA mediated target of tumor suppressor CPEB1 (Shoshan et al. 2015).

There is hope that A-I editing could be targeted for disease therapy. In addition to cancer, altered editing patterns are shown to drive neurodegenerative diseases, cardiovascular diseases, as well as autoimmune disorders (Gatsiou et al. 2017).

What Makes RNA a Better Target than its Precursor?

Tweaking DNA is not something to be undertaken lightly as there is always the possibility of off-target effects. However, as many proteins lack a classical drug binding pocket and are thought of as “undruggable”, editing their RNA may open up a way to target them and treat diseases. If RNA editing can enable DNA mutations to be corrected, without compromising the integrity of genetic information, it may even prevent the production of an aberrant protein that causes a disease, something that is a tantalizing possibility. However as with all gene-editing technology with therapeutic potential, concerns associated with immunogenicity, targeted delivery, and the permanent off-target effects pertaining to CRISPR-based tools will need to be addressed first (Chen et al. 2019).

Many different RNA-editing tools have been designed that leverage the amenability of RNA (Aquino-Jarquin 2020). Editor systems inspired by RNA-targeting the Cas13 enzyme by fusing the catalytically inactivate version of Cas13 (dCas13) to the catalytic domain of ADARs, direct the ensemble to transcripts harboring specific A-to-I edited sites (Cox et al. 2017).

Some concerns around immunogenicity are already being addressed, such as harnessing the endogenous ADAR reservoir in cells, which can, to an extent, bypass these concerns. Promising in vivo proof-of-concept studies have described the use of guide RNAs in mouse models to help recruit endogenous ADARs and fix mutations in genetic disorders, such as Duchenne muscular dystrophy and ornithine transcarbamylase deficiency (Katrekar et al. 2019). Recently, Sinnamon et al. 2020 repaired a disease-causing mutation in MECP2 in mouse models of Rett-syndrome.

Antisense oligonucleotides, that bind target mRNA at the mutation site, have also been engineered to rectify A-to-I editing events in disease relevant transcripts (Merkle et al. 2019). A mutation in SERPINA1, the most common cause of the liver indication α1-antitrypsin deficiency, has also been amended with minimal off-target effects.

Despite the potential of this technology, the pathway from the bench to the clinic is a long journey with many questions still left unanswered. It is possible that within a decade or two, we could see RNA editing therapies becoming a reality!

Read about CRISPR-Cas9 editing and the discoveries behind the 2020 Nobel Prize in Chemistry in our blog “How CRISPR Revolutionized Science.”

In this guest blog for Lab Crunches, Shermaine Thein explores the concept of aging and why how old we are may not be as simple as just a number....