Until recently, CRISPR-Cas9 was an ancient secret of many bacteria and archaea, granting them adaptive immunity to the viruses that infect them. In a few short years, the system has been discovered, its function identified, and its application repurposed to provide an extraordinarily powerful tool for researchers to achieve genetic engineering. This blog examines the technology that was awarded the 2020 Nobel Prize in Chemistry.

Just like humans, bacteria can get sick from a viral infection. CRISPR and Cas9 genes form an adaptive immune system to help bacteria remember specific viral sequences and fight back upon reinfection, akin to how humans produce antibodies to guard against a threat that we have encountered before (Figure 1). 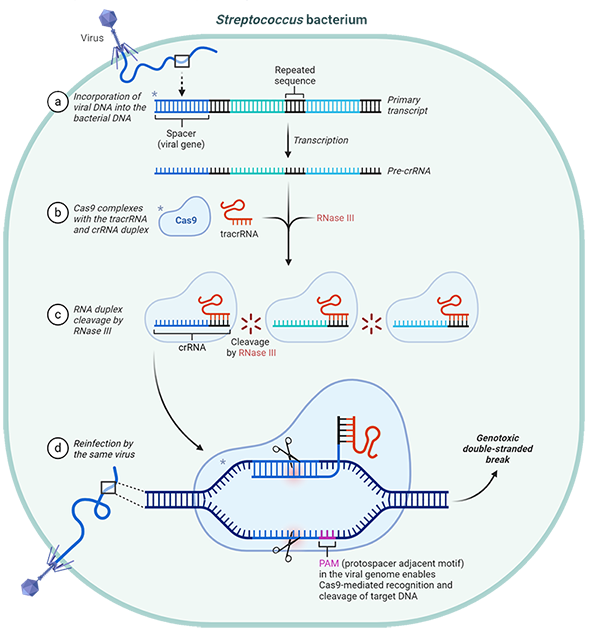 CRISPR is short for Clustered Regularly Interspaced Short Palindromic Repeats, comprising an array of repeated DNA sequences. These sequences are separated by unique spacers derived from viruses. CRISPR-associated (Cas) endonucleases are encoded by nearby genes and are programed to recognize the sequence of the spacer. If a virus with the stored genetic sequence infects the bacteria, Cas proteins get to work, cutting the viral genome and destroying it (Jiang and Doudna 2017).

Like adaptive immunity in humans, CRISPR-Cas9 provides long-lasting immunity. Amazingly, because of the way that bacteria reproduce, the sequences are heritable. This means that bacteria benefit from protection against the viruses that were encountered by their ancestors (Rath et al. 2015).

CRISPR-Cas9 Can Be Adapted as a Gene Editing Tool

A Cas9 endonuclease identifies its target using a single guide RNA (sgRNA) with specificity to a stored viral sequence. In this way, the Cas9 will cut whatever nucleic acid sequence the guide RNA tells it to cut. This mechanism is responsible for the success of CRISPR-Cas9 as a tool for gene editing (Figure 2). 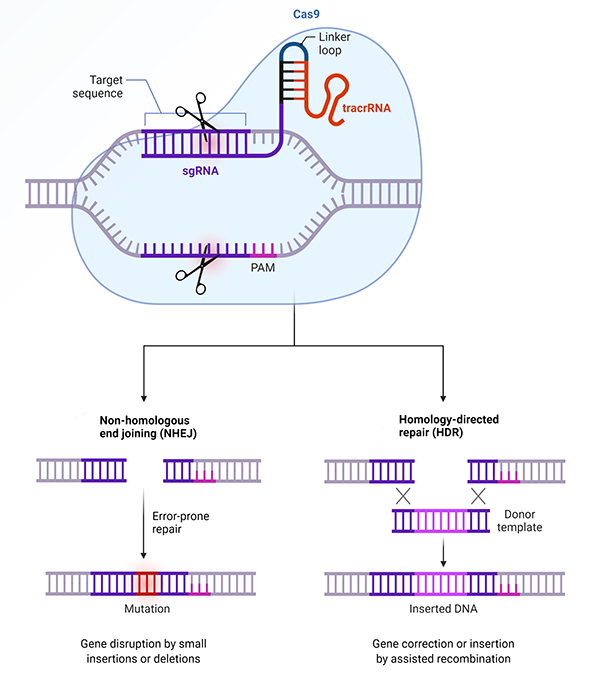 Fig. 2. Mechanism of CRISPR-Cas9. When researchers edit a genome using the CRISPR-Cas9 genetic scissors, they artificially construct a single guide RNA (sgRNA), which matches the DNA code where the cut is to be made. The scissor protein, Cas9, forms a complex with the sgRNA, and directs the scissors to the precise location in the genome where the cut will be made. Adapted from “2020 Nobel Prize in Chemistry: A Tool for Genome Editing (CRISPR-Cas9)”, by BioRender.com (2020).

The guide DNA for Cas9 can be reprogramed in the lab to target a specific location in the genome of a plant, fruit fly, mouse, or human, for example. The ability to cut a human genome at a specific sequence allows the specific insertion, knockout, or repair of a gene (Xing and Meng 2020).

Through this mechanism, CRISPR-Cas9 provides a method for editing the genomes of plants and animals. Crucially, CRISPR-Cas9 is easy to use. Until development of this system, it was time-consuming and sometimes impossible to directly edit the genome of a plant or animal. The research applications of CRISPR-Cas9 are countless, from the creation of transgenic mice expressing a fluorescent version of a protein of interest (Uemura et al. 2016) to the advancement of genetic screens with the ability to mutate a large number of genes and study the association between genotype and clinical manifestation (So et al. 2019).

Charpentier and Doudna Showed the Potential of CRISPR-Cas9

The knowledge that CRISPR-Cas9 can be used as a programable tool for gene editing is attributable to pivotal work by to Emmanuelle Charpentier and Jennifer A Doudna, and they shared the Nobel Prize in Chemistry 2020 for their work. Their initial collaboration was into the function of the CRISPR-Cas9 system of Streptococcus pyogenes, a bacterium that causes pathogenesis in humans. One of their ideas was to develop a new antibiotic. They studied the CRISPR-Cas9 system of S. pyogenes in detail, discovering the exact mechanism that the bacteria employs to evade viruses. This, itself, was an important finding in our knowledge of pathogenic bacteria.

But their investigation didn’t stop there. Having identified how the CRISPR-Cas9 system is able to cleave specific sequences, they created a guide RNA programed to target a specific gene in five different places. They showed that reprogramed CRISPR-Cas9 was able to cut the DNA in those exact places.

Charpentier and Doudna published their work in 2012, introducing the world to a new tool for genetic engineering. Their experiments showed that the CRISPR-Cas9 system can precisely edit genes by simply reprograming the sequence that Cas9 is instructed to cut (Jinek et al. 2012).

CRISPR-Cas9 for Treatment of Genetic Disease

The discoveries made by Charpentier and Doudna strengthened the possibility of using CRISPR-Cas9 to treat genetic diseases at their roots by disabling or correcting problematic genes. These diseases include inherited disorders but also diseases caused by genetic mutations that happen through life, such as cancer or some viral infections including HIV.

2019 was a strong year for CRISPR-Cas9 and human health. The first wave of clinical trial data using CRISPR-Cas9 gene editing in humans emerged, representing a milestone in our journey towards CRISPR-Cas9 treatments. It also saw the launch of the first clinical trial to attempt gene editing inside the body, rather than in vitro. This trial aims to treat a type of hereditary blindness and involves direct injection of a virus carrying CRISPR gene editing machinery into the eye (Ledford et al. 2020).

Directly editing the genome of living humans is a serious feat and needs to be studied with the utmost caution to ensure that there are no off-target or detrimental effects. The results, however, could be game-changing.

The Enormous Power of This Genetic Tool

The CRISPR-Cas9 system has enabled countless scientists to achieve research goals that would have been difficult or near impossible without this technology. The possibility that CRISPR-Cas9 could edit out diseases in so many people is tantalizing. Aside from research and human health, in the field of plant biology, CRISPR-Cas9 has been used to make staple crops more resistant to drought and to pathogens. The technology may play a significant role in the improvements to food security and quality, especially in light of climate change (Joshi et al. 2020). We thank Emmanuelle Charpentier and Jennifer A Doudna for their irreplaceable contributions towards making these developments possible.

Learn how you can use cell sorting to allow monocultures of edited cells to be generated in a reliable and rapid manner in this example workflow.