Performing Inclusive Research in the Lab

Historically, women were excluded from clinical trials due to concerns surrounding unknown effects of new drugs on their eggs, pregnancy, or fetal development. In 1977, the Federal Drug Authority (FDA) recommended excluding women of childbearing age from clinical trials,  which contributed to a shortage of data on the effect of drugs on women. It wasn’t until 1986 when the National Institute of Health (NIH) established a policy to encourage scientists to include women in their studies. This recommendation by NIH was then extended to minority groups in 1989, and then in 1993 became enshrined in law to ensure that women and minority groups were included in trials.

A male sex bias also exists in non-clinical studies, when researchers preferentially study male animals and cells ‒ a review of sex bias in mammals in biological fields in 2010 found that male bias was evident in eight disciplines out of the ten examined (Beery and Zucker 2010). From 2016, a new NIH policy was introduced to combat this and ensure that female animals are also included in research studies.

While these changes have improved our knowledge about female health, women’s health conditions, like endometriosis, are still understudied. In this blog, Samantha Zambuto shares her perspective on why it is important that scientists study women’s health.

Samantha Zambuto is a PhD student in Bioengineering at the University of Illinois at Urbana-Champaign. Her research interests are in reproductive tissue engineering and she is specifically interested in studying the endometrial tissue microenvironment during pregnancy. Her dissertation research utilizes gelatin-based hydrogels to create three-dimensional models of the endometrium that include sufficient complexity to model dynamic endometrial processes, including blood vessel formation and hormonal stimulation.

Female reproductive health is a historically understudied and underfunded field (Liu and Diprietro Mager 2016). As a female, biracial scientist, I strongly believe I have a responsibility to study previously understudied, under represented groups (such as women and people of color), especially in basic science and medical research to improve their healthcare. As scientists, I believe we have a responsibility to give back to the scientific and medical communities and ensure equality and inclusion in scientific studies and healthcare for future generations.

Inspiration comes from many places. A series of seemingly fortuitous events have led me to pursue my PhD in bioengineering with a focus on reproductive tissue engineering. My passion for inclusive science began while I was working on my Master’s degree. At the time, I was working in a tissue engineering lab with a focus on neuroscience. While preparing for a seminar on my project on traumatic brain injury, I came across a sentence in a review paper that mentioned how sex steroid hormones, specifically progesterone, may have neuroprotective effects (Xiong et al. 2013). I found it fascinating that hormones may play key roles in disease and injury and that pre-menopausal females might have better neuroprotection compared to males. I began work on a project that looked at the neuroprotective effects of estradiol in ischemia.

The more I worked with the hormones, the more literature I came across that discussed sex exclusion in basic science and medical research (Woodruff et al. 2015, Woodruff et al. 2014, Yoon et al. 2014, Committee on Understanding the Biology of Sex and Gender Differences 2001, Nieuwenhoven and Klinge 2001, Fisk and Atun 2009).

In 2015, the NIH expected sex to be included as a biological variable factored into experimental design. However, sex bias still exists in biomedical research, largely stemming from the assumption that males and females are physiologically and behaviorally similar, and that even if sex differences do exist, they will be unimportant or irrelevant (Yoon et al. 2014). Sex bias can affect health outcomes and patient care. For example, fewer women are enrolled in clinical trials, often due to reproductive differences compared to men, including menstrual cycles (Mansukhani et al. 2016), which can lead to incorrect drug dosages (Woodruff et al. 2014, Woodruff et al. 2015). Studies of the drug zolpidem revealed that females had a higher sensitivity to the drug than males, which ultimately led to the U.S. Food and Drug Administration (FDA) reducing the recommended dose for females by half, but only after the drug was already on the market (Woodruff et al. 2015, Marrocco and Stewart 2001, Mansukhani et al. 2016). Additionally, basic science still suffers from sex bias. One study revealed that one third of 2,347 articles using animals and cells did not specify the sex of their samples and only 3% of these articles studied both sexes (Yoon et al. 2014). Nevertheless, studying both sexes in basic science could provide crucial insights into sex differences in disease and help tailor treatment approaches. 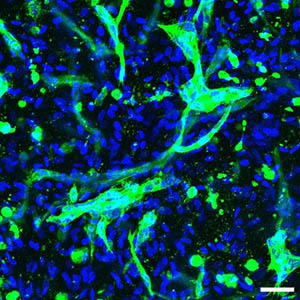 Fig. 1. Confocal image of endometrial stromal cells and human umbilical vein endothelial cells (HUVECs) cultured in a gelatin hydrogel. Scale 50 µm HUVECs are shown in green and nuclei are blue.
After learning about sex bias in research, I became increasingly interested in performing inclusive science with a specific focus of improving basic science research for females. This ultimately led me to my current PhD position and my current suite of doctoral projects. I’ve always found the female body fascinating: how do an egg and a sperm cell transform in 9 months into a fully-formed human being? As an interdisciplinary researcher, I work at the intersection of biomedical engineering, reproductive biology, and biomaterials. I have learned to apply my diverse skill sets to unique projects that require an interdisciplinary mindset and wide breadth of knowledge. I currently investigate processes relevant to the menstrual cycle, endometrial function, and implantation.

Female reproductive health has been historically understudied and underfunded. Because of this, few models of the endometrium (lining of uterus) exist, and those that do, lack the complexity necessary to study pregnancy disorders (like preeclampsia) and diseases/disorders associated with the female reproductive tract (such as endometriosis and infertility).
My dissertation project focuses on developing three-dimensional models of the endometrium that include sufficient complexity to study pregnancy and dynamic endometrial processes, including blood vessel formation and hormonal stimulation (Zambuto et al. 2019, Zambuto et al. 2020). I use gelatin-based hydrogels to study how cells from the endometrium communicate with trophoblast cells from an implanting embryo (Figure 1). These models will allow for the study of events early in pregnancy, which has never been observed in humans due to ethical concerns and the inability to observe implantation (occurs 6-12 days after conception). I will subsequently use these models to determine how stress contributes to pregnancy disorders. Models such as these will significantly enhance our knowledge and understanding of reproduction, pregnancy, and pregnancy disorders. In developing models of increasing complexity, I aim to address poor pregnancy outcomes as well as maternal and fetal mortality by providing platforms to test hypotheses relating to pregnancy. 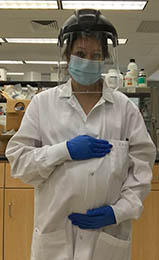 I am now a 4th year PhD candidate in the bioengineering department at my university and I am also pregnant with my first child who is due in September 2020. Now, I have the unique opportunity of simultaneously experiencing pregnancy as a patient while also studying its intricate cellular mechanisms in the lab. It’s fascinating to read about my baby’s development each week while also running experiments on trophoblast and endometrial cells. And to top it all off, my baby gets to join me in the lab while I’m pregnant and running experiments. How cool is that?

Overall, I have had a positive PhD experience. I won’t deny the challenges I’ve faced as a researcher, especially in a niche field. However, if you asked me if I would have changed anything that led up to now, I wouldn’t change a thing. I hope that my research has a positive impact on medical research for female reproductive health and that I can inspire others to perform inclusive, impactful research for understudied groups as well.

Lab Crunches is looking for guest contributors to share insight into life at grad. school. If you are interested in finding out more, get in touch.

Marrocco A and Stewart DE (2001). We've come a long way, maybe: recruitment of women and analysis of results by sex in clinical research. Journal of Women's Health & Gender-Based Medicine 10, 175-179.

Nieuwenhoven L and Klinge I (2010). Scientific excellence in applying sex- and gender-sensitive methods in biomedical and health research. Journal of Women's Health 19, 313-321.