The oldest discovered tattoos date back from over 5,000 years ago, yet despite their ancient origins, the process behind their permanency has remained unclear. In their recent study,  Baranska et al. (2018) identify macrophage dynamics as key to tattoos longevity.

Tattoos and the Immune Response

Tattoo needles punch through the epidermis of the skin and deliver ink into the second layer of skin, the dermis. This layer is rich in blood vessels, lymphatic vessels, nerves and other structures, as well as being home to dermal dendritic cells, macrophages, CD4+ T cells and innate lymphoid cells. These cells are ready to trigger a reaction in response to damage, such as that caused by the tattoo needle entering the skin and injecting pigment.

The ink pigment is a foreign body and the immune system responds and attempts to clear it. Newly tattooed skin swells and tiny particles are carried away by blood and lymph. In fact, some tiny nanoparticles of ink have been recorded in lymph nodes (Schreiver et al. 2017), but the majority of the tattoo's design stays where the tattoo artist injects it.

As part of this clean-up process, dermal macrophages phagocytose the ink, which gets trapped in their vacuoles. Unlike bacteria, viruses and other foreign materials, which are easily broken down and removed, the enzymes in the vacuole have no effect on the ink. Since the macrophages can't break down the ink, they contain the attack on the immune system by staying in place in the dermis, keeping the ink locked away in their vacuoles. As a result, the tattoo design is trapped in the dermis. What happened next though was a mystery. Do macrophages become immortalized or live considerably longer?

Macrophages Hold on to the Ink

To study what happens with tattoo ink, Baranska et al. (2018) tattooed the tails of mice with green bands. As expected, macrophages took up the green ink in their cytoplasmic vacuoles. However, non-immune cells, such as skin cells, could also be trapping the ink and contributing to the effect. CD45 is a general marker of the immune system and as such it is expressed on immune cells but not on other cell types present in the dermis, such as skin cells.Upon examination, researchers found that none of the isolated CD45 negative skin cells contained any of the green ink particles.

Since the macrophages are responsible for trapping the ink, the question is what happens when these ink-containing macrophages die? Do tattoos disappear?

Researchers used diphtheria toxin to selectively kill cells expressing the monocytic marker CD64. CD64 is expressed on monocytes, macrophages, myeloid precursors and follicular dendritic cells. By generating mice that had the diphtheria receptor under control of the CD64 gene, all macrophages, as well as monocytes and monocyte-derived cells, were  specifically and easily ablated.  The authors found that as the macrophages die they release the trapped pigment. However, after two days of treatment with diphtheria toxin, the pool of macrophages is gradually replaced by circulating macrophages, which have been replenished by bone marrow derived monocytes.

This free ink is then engulfed by these new incoming macrophages. The 'release-recapture'; cycle continues indefinitely, thus ensuring the tattoos permanence (Figure 1).

Fig. 1. Release-recapture cycle. Dermal macrophages phagocytose tattoo ink and it is retained in their vacuoles. Upon their death, the ink is released but then recaptured by new incoming macrophages that are derived from bone marrow monocytes.

The resilience of tattoos was further demonstrated by researchers grafting the tattooed skin from one mouse onto the skin of another non-tattooed mouse. After six weeks, the majority of the pigment-containing macrophages had come from this recipient mouse and not the tattoo donor.

The recapture-release cycle is exactly what makes removing a tattoo tricky. Although lasers break down the pigment and kill the cells, new macrophages are recruited to the damaged tissue and recapture much of the released pigment. This new knowledge about macrophage dynamics may actually help improve the tattoo removal technique; by impairing macrophage recruitment to the site the released pigment could then be removed by the lymphatic system.

Know Your Macrophages from Your Monocytes

We stock a number of key monocyte markers as well as markers to detect macrophages and dendritic cells.

Bio-Rad is the only supplier of the original Anti-F4/80 Antibody, clone CI:A3-1 (MCA497). A well-characterized and extensively referenced mouse macrophage marker, with >500 citations in CiteAb (Figure 2). 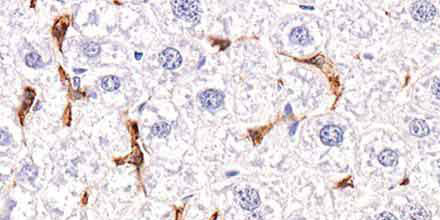 Schreiver I et al. (2017). Synchrotron-based ν-XRF mapping and μ-FTIR microscopy enable to look into the fate and effects of tattoo pigments in human skin. Scientific Reports 7, 11395.