Genes, but Backwards: Grist for the Evolutionary Mill

Where do new genes come from? This guest blog, by Md Hassan Uz-Zaman, discusses this question and how our view on this has evolved over time.

Historically, where genes come from had a seemingly easy answer: new genes come from other genes. For example, a gene can become duplicated to yield an extra copy, which can then diverge until it reaches a new function — the creation of a new gene. This is the more commonsense way of thinking about evolution: taking existing stuff and tinkering with it until a new function is produced. Francois Jacob summed up this idea nicely when he said, “Evolution does not produce novelties from scratch” (Jacob 1977). In recent years, however, scientists are taking note of evolution doing just that: making new genes from “scratch” — non-coding sequences.

It’s not uncommon to find genes in a species that are utterly unique, lacking any significant similarity to genes found in any other species. This seems puzzling on the “tinkerer” view of evolution proposed by François Jacob. If genes are transmogrified versions of mom and pa genes, shouldn’t we expect to find these relatives somewhere else?

Yet, for some reason, we don’t. This pattern is consistent for virtually all organisms — no matter how many genomes we sequence, and how meticulous we are with our search strategies, each species contains a set of genes that are uniquely theirs, without any sign of a “relative gene” anywhere else (Johnson 2018). It’s as if the genes were newly minted in the species.

Interestingly, scientists did manage to track down the ancestors of some of these genes. Except these weren’t other genes, but noncoding sequences (Vakirlis et al. 2020). Apparently, what used to be a non-coding, nonfunctional sequence in an older species was shaped into a functional protein-coding gene in a newer one. Researchers dub this process de novo (“from nothing”) gene evolution, and this has quickly become an exciting field of research in eukaryotes (Zhang et al. 2019).

This model of de novo gene evolution derives its plausibility from eukaryotic systems. Eukaryotic genomes, especially complex ones, are somewhat clunky: only a minor fraction of their genomes code for proteins or functional RNAs. That means they have a lot of non-coding sequence lying around, waiting to be potentially repurposed as new genes.

This idea breaks down however when we enter the realm of prokaryotes. More often than not, these genomes are tightly packed with genes, leaving little non-coding “real estate” for evolution to play with. One would think that the humble E. coli hasn’t seen many de novo gene birth events in its time.

This is where backward genes enter the picture.

DNA has two strands, and each gene takes up a segment of either one. This means the segment on the opposite strand — the antisense segment — isn’t coding for anything. Technically, these regions are non-coding.

This requires some reconfiguration of how we usually think of coding potential, but it’s warranted. A gene, after all, takes up just one strand in its location. Indeed, if we laid out the two strands end to end, we’d find vast tracts of DNA that don’t code for anything. In a roundabout way, this offers a solution to the limited real estate problem. What lends more plausibility to this view is that bacterial antisense regions are transcribed all the time.

Genes are a Spectrum, not a Binary

We can look at an RNA polymerase gene and easily identify it as a gene. We can also look at a non-coding intron and identify it as not a gene. But in the course of gene evolution, a sequence might show properties that straddle these options. It might be transcribed and translated, but those nascent peptides might not confer any significant fitness advantage. Such elements have been referred to as “proto-genes” in the literature — not quite a gene, but perhaps getting there (Carvunis et al. 2012). With a little more time, they might encode beneficial peptides, which might in turn get noticed by natural selection (Figure 1). Behold, a gene. 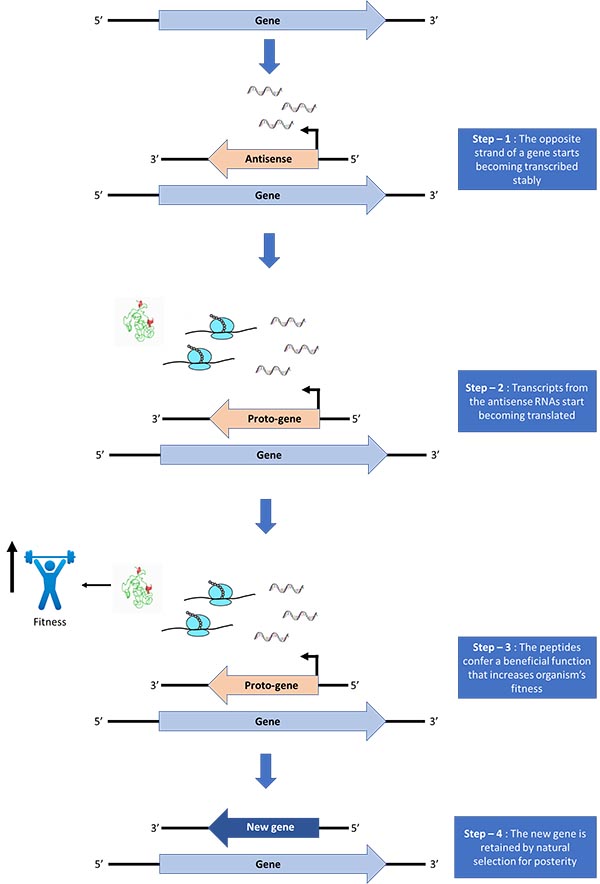 Fig. 1. The journey of becoming a gene. The new gene might subsequently gain more gene-like features, like getting longer, gaining higher transcription and/or translation, and encoding more complex peptides.

This is precisely why antisense regions in bacteria are interesting. Instead of lying dormant in the cell, they are transcribed pervasively (Raghavan et al. 2012). This means at least some of these transcripts, upon association with a ribosome, can even be translated, providing evolution with a rich pool of nascent RNAs and peptides to draw from. If transcription, translation, and beneficial function are three legs of the journey to being a gene (or at least a proto-gene), bacterial antisense regions are one-third the way there.

Recent evidence suggests that fraction might even be two-thirds.

Ribosome profiling is a technique that can sequence RNA transcripts in the act of being translated, making it possible to identify all translated regions in the genome. Using this approach, one group recently discovered hundreds of bacterial antisense open reading frames with evidence of translation (Zehentner et al. 2020). While translation alone isn’t a strong enough indication of functionality, this shows that antisense regions constitute ample raw material primed for minting new genes.

Another group addressed this question head-on by identifying newly transcribed regions in the yeast genome — regions that were lying dormant in ancestral species but started being transcribed in yeast. Such gain in transcription is the first phase of gene birth. Of the 213 such genes identified, half of them were found on the opposite strand of existing genes, and many showed evidence of translation (Blevins et al. 2021). This demonstrates yeast proto-genes are enriched in the antisense regions of the genome.

The question of whether antisense regions in bacteria are functional is a controversial one. Indeed, a recent review suggests there’s no scientific consensus on what constitutes “function” to begin with (Keeling et al. 2019). Leaving that question aside, there are independent biological reasons to suspect that these elements have a longer-term significance: they provide evolution with a deep, rich pool of proto-genes to select from.

Indeed, given their sheer numbers, and considering the evidence for transcription and translation, it's not unlikely that at least some of these elements have actually ripened into living, breathing genes.

We have a variety of flow cytometry tools and resources that can complement your research.

Johnson B (2018). Taxonomically restricted genes are fundamental to biology and evolution. Front Genet 9, 407.