As part of International Day of Women and Girls in Science, Bio-Rad invited researchers to share their own experiences of being a women in science. In this article, we speak to Professor Sara Mole about her career.

Sara Mole is a Professor of Molecular Cell Biology at University College London (UCL), UK.  Her research focuses on inherited neurodegenerative disorders that affect children, in particular Batten disease. She is a champion for gender equality and led her department to obtain an Athena SWAN Gold Award. This is the highest level of a UK award, initially set up to recognize advancement of gender equality in science (initially as Scientific Women Academic Network), but now considers gender equality in all disciplines and at the institutional level. She is also UCL Provost’s Envoy for Gender Equality at UCL and has received awards for her commitment to gender equality in science and public engagement. 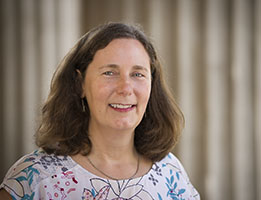 Bio-Rad (BR): When did you first become interested in a career in science?

Sara Mole (SM): At primary school, I remember being really interested in the TV programs we watched as a class that were scientific and medical. That led me to do science A levels (UK high school exams used for college entrance), a scientific degree, and a PhD.

BR: Can you describe your career path?

SM: I kept trying to do more of what I found interesting – so that led into research connected with disease, starting with cancer for my PhD and a postdoctoral position, then inherited diseases in the early stages of human gene mapping. I also enjoy collaborating so have often involved those with the relevant skills and over the years I’ve built a network of people in UCL and across Europe, who have advanced understanding of Batten disease.

BR: Have you encountered any challenges along the way and if so, how did you overcome them?

SM: The main challenge when running your own lab is to maintain grant income, a challenge for a rare disease. Sometimes this has been seamless, at other times it has dipped, and research has lost momentum as contracts ended for young scientists. I find it helpful to remind myself of my long term research goals, as there can be alternate routes that can be followed towards that same goal. Also, this helps me to focus my efforts rather than trying to do everything that is interesting.

BR: Can you tell us about your current research?

SM: I research on a group of rare devastating inherited neurodegenerative diseases of children, called Batten disease. The genes are now identified, and we are both trying to understand what they do as well as develop gene therapies or drug therapies to treat them.

BR: What has been your career highlight to date?

A few — identifying the first gene to cause Batten disease, back in 1995; a set of papers showing that introducing genes into cells of the retina prevented loss of vision in a mouse model of the disease; establishing yeast as an excellent cell model for the main type of Batten disease, and using this to prove that a mutation, shared by most children affected by Batten disease, has complex effects which are important to understand in terms of therapeutic development – this latest work is not yet published.

BR: Are there any scientists who have inspired you?

SM: No one person. I am inspired by those who are curious and think deeply as they are always interesting to talk to and also listen to.

BR: What advice would you give to early career scientists?

SM: Learn as many lab skills as you can, find a big question or challenge that needs to be addressed, discover how you work best, look out for those who think differently or others may be ignoring – they may hold the key to an exciting new discovery. Be collaborative and then as well as contributing to the research of others, you will always have someone who can help you when you most need it.

At Bio-Rad we have made neurodegenerative diseases a key focus area, with a range of products and resources to support research into this important field.