Looking Beneath the Surface: Viral Clearance by Anti-Nucleoproteins

Antibody production is a crucial step in the host's adaptive immune response against a virus. Once antibodies attach to the virus's surface, they cause agglutination and facilitate phagocytosis. These surface protein antibodies also mask the viral antigens that attach to cells, preventing further infection. However, antibodies to nonsurface viral proteins are also produced during infection but have an unclear role in host immunity.

This guest blog examines a paper published by Caddy et al. (2020) in EMBO Journal that sheds new light on anti-nucleoprotein antibodies and clearance of viral infections that could have important implications for vaccine design.

The structure of viruses is very simple compared to our cells, often consisting of just a few proteins, enzymes, and the viral genome. One of these viral proteins is known as nucleoprotein. Nucleoproteins coat viral DNA or RNA, assisting in the packaging, transcription, and replication of the virus (Hu et al. 2017). Although this means nucleoproteins are located internally in the virus, anti-nucleoprotein antibodies are quickly produced by the infected host, usually much faster than surface proteins that facilitate viral entry into host cells (Eschli et al. 2007). Despite the high serum titer during the infection, these anti-nucleoprotein antibodies do not help neutralize the virus. This means that they do not stop the virus from entering and infecting other host cells so their role in viral clearance is not clear. However, these anti-nucleoprotein antibodies have long been recognized as useful diagnostic markers of infection for influenza and, more recently, for SARS-CoV-2 (de Boer et al. 1990, Fenwick et al. 2021).

What is the functional role of these antibodies in the host immune response if they do not stop the spread of the infection and are relatively useless for phagocytosis opsonization? Interestingly, these anti-nucleoprotein antibodies have been found to be protective against viral challenges for RNA viruses, such as influenza (LaMere et al. 2011). However, the mechanism behind the protective effects of anti-nucleoprotein was still largely a mystery.

The Role of TRIM21 and CD8 T Cells

Scientists set out to understand how these nonneutralizing nucleoprotein antibodies could protect against enveloped viruses. They hypothesized that anti-nucleoprotein antibodies likely conferred their protection through activation of tripartite motif containing-21 (TRIM21) (Caddy et al. 2020). Located in the cytosol of host cells, TRIM21 is an internal antibody receptor and ubiquitin ligase, meaning that it marks proteins for degradation (Foss et al. 2019). To test their hypothesis, the researchers infected mice with lymphocytic choriomeningitis virus (LCMV), an enveloped RNA virus.

When the researchers infected TRIM21 knockout mice with LCMV, all knockouts had succumbed to infection by day ten. Additionally, when the TRIM21 knockout mice were given a monoclonal anti-nucleoprotein antibody, they showed no improvement in weight gain or LCMV clearance (Caddy et al. 2020). However, wild-type mice given the anti-nucleoprotein antibody recovered more quickly than untreated wild-type mice and had reduced the overall viral load. These results indicate that TRIM21 is essential for anti-nucleoproteins to provide proper LCMV clearance.

The next step was understanding how the interaction between TRIM21 and anti-nucleoprotein antibodies could clear the infection. Because TRIM21 helps to degrade proteins, the researchers thought that the nucleoprotein peptides might be presented on MHC class I, activating CD8+ cytotoxic T lymphocytes (CTLs) which would then kill the infected cells. When mice were depleted of CTLs, anti-nucleoprotein antibody administration did not affect viral load. However, in wild-type mice administered with anti-nucleoprotein, there was an increase in CTLs ten days post-infection. The researchers also showed that splenocyte CTLs raised during LCMV infection are more likely to eliminate infected cells displaying peptides on MHC class I in wild-type animals (Caddy et al. 2020). The increased CTL-mediated killing was not observed in TRIM21 knockout mice. Their data shows that anti-nucleoprotein and TRIM21 enhance MHC class I antigen presentation and cause cell death by CTLs, a novel mechanism of immune synergy between T cells and antibodies (Figure 1). The researchers also suggested that this same model can activate memory T cells upon reinfection, though this was not directly shown in their manuscript. 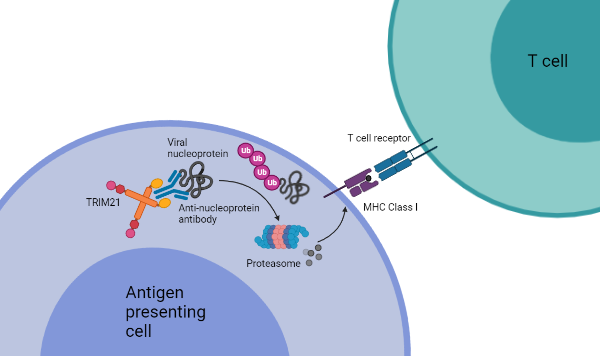 Fig. 1. A novel mechanism of immune synergy. TRIM21, a cytosolic antibody receptor and ubiquitin ligase, recognizes viral nucleoprotein via anti-nucleoprotein antibodies. TRIM21 then targets the viral nucleoprotein for degradation by the proteasome. Viral peptides are displayed on the surface of the antigen presenting cell and detected by T cells. Activated cytotoxic T cells then destroy the infected cells.

As the SARS-CoV-2 pandemic began to sweep the globe in 2019, a need for new vaccines became clear. Currently, most vaccines for SARS-CoV-2 target the virus's surface spike protein mRNA. However, much like influenza surface glycoproteins, these spike proteins are prone to mutation over time (Li et al. 2020). This means that for vaccines to remain effective, multiple "booster" vaccines against the newly mutated spike proteins may be required.

Although Caddy et al. used LCMV to understand the role of anti-nucleoprotein antibodies, SARS-CoV-2 is also an enveloped RNA virus that produces anti-nucleoprotein antibodies (Liu et al. 2020). Unlike spike proteins, nucleoproteins are more resistant to mutations due to their function in helping replicate the viral genome (Moreira et al. 2016). This means that the efficacy of vaccines targeting nucleoproteins would likely provide immunity, with no need for subsequent vaccinations, even if the surface of the virus mutates. Thus, developing vaccines which target the nucleoprotein could be more beneficial than vaccines against surface antigens for immunity against enveloped viruses.

Caddy et al. have uncovered a novel mechanism by which antibodies against nucleoproteins can increase viral clearance through activation of TRIM21, increasing MHC-class I antigen presentation, and mobilizing CTLs against infected cells. Although portions of this process still need further investigation, their findings could lead to new treatments and vaccine development strategies for various enveloped viruses, including SARS-CoV-2.

Bio-Rad has a highly validated Mouse Anti-Human TRIM21 Antibody (VMA00730) that is ideal for western blot detection of TRIM21. 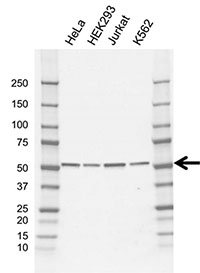 de Boer GF et al. (1990). An ELISA for detection of antibodies against influenza A nucleoprotein in humans and various animal species. Arch Virol 115, 47-61.

Eschli B et al. (2007). Early antibodies specific for the neutralizing epitope on the receptor binding subunit of the lymphocytic choriomeningitis virus glycoprotein fail to neutralize the virus. J Virol 81, 11650 -11657.