When the immune system encounters a pathogen, macrophages play an important part in mounting a response and repairing any damage caused. During this process, activation of macrophages by classical or alternative pathways leads to macrophage polarization. By responding to environmental clues, macrophages can respond appropriately to the situation, whether it is a defensive and pro-inflammatory (M1) or immune regulation and repair (M2).

Tumors have developed a variety of different strategies to avoid the immune response promoting their survival and proliferation.  A recent study by Bohn et al. (2018) highlights a mechanism that melanoma utilizes to subvert the immune response, by promoting the polarization of tumor associated macrophages (TAMs) towards a non-inflammatory, M2-like phenotype. This creates a tumor permissive environment that facilitates further tumor growth.

A feature of cancer cells is the ability to adapt their metabolism to increase their chances of survival; promoting tumor growth in otherwise unfavorable environments like hypoxia. Aerobic glycolysis is one hallmark of cancer metabolism leading to increased uptake of glucose and production of lactate acidifying the tumor microenvironment (Sekine et al. 2018).  Melanomas show much higher glycolytic activity compared to other cancer types such as colon adenocarcinomas. High glycolytic activity leads to an excessive production of hydrogen ions and organic acids, like lactic acid, creating the abnormally acidic tumor microenvironment. Bohn et al. demonstrated in their publication that the abnormal acidification can be sensed by TAMs and drives them towards an M2 macrophage (anti-inflammatory) form that benefits the tumor.

To investigate these findings, Bohn et al. generated syngeneic tumor mouse models of melanoma and colon adenocarcinoma tumors.  They cultured melanoma (B16) and colon adenocarcinoma (MC38) cell lines and injected B16 cells into the right flank and MC38 cells into the left flank of syngeneic mice. Tumors were then allowed to develop in these regions for 2-3 weeks before being analyzed.

The authors observed that their B16 tumor cells consumed more glucose (producing more lactate) than MC38 tumor cells, which have low glycolytic activity. This increased glycolytic activity correlated with a more acidic microenvironment in melanomas, as judged by LAMP2 expression as a marker of acidification.

How is the acidification sensed and what is the effect?

Extracellular pH has been shown to be sensed by a number of G protein-coupled receptors (GPCRs) resulting in increased production of the second messenger cyclic AMP (cAMP) (Justus et al. 2013). The authors hypothesized that these GPCRs could be sensing highly acidic pH, leading to downstream signaling events that benefit tumor survival. After detecting increased levels of cAMP in B16 but not MC38 tumors, they investigated the expression of genes that are known to be regulated by cAMP. They found that mRNA levels of ICER (inducible cAMP early repressor) were increased in B16 melanomas versus MC38 colon adenocarcinomas. This result was found to be comparative in biopsies from human samples, meaning that cells expressing ICER were likely to be key to this model.

Which cells express ICER after sensing the low pH?

By measuring intracellular cAMP by flow cytometry, TAMs (F4/80+, CD11b+, MHC class 2+) were identified as having high cAMP; indicative of increased GPCR signaling. To verify that this was the result of sensing the acidification, bone marrow-derived macrophages were treated with lactic acid and hydrochloric acid. As expected ICER expression levels were increased. They also identified two previously-demonstrated acid-sensing GPCRs (GPCR65 and GPCR132) that are responsible for the increased ICER expression. To demonstrate the importance of ICER in non-inflammatory polarization of TAMs, Bohn et al. conducted a loss-of-function study in ICER deficient mice, and mice with myeloid specific ICER deficiency. In contrast to mice with functional ICER, ICER-deficient mice were able to eradicate the tumor, verifying that ICER played an important role in immunoevasion. Targeting this pathway could therefore have therapeutic potential.

This new signaling pathway highlights how, in highly glycolytic tumor cells, an increased acidic microenvironment leads to activation of a GPCR signaling pathway in TAMs resulting in their polarization to a non-inflammatory phenotype enabling immunoevasion (Figure 1). 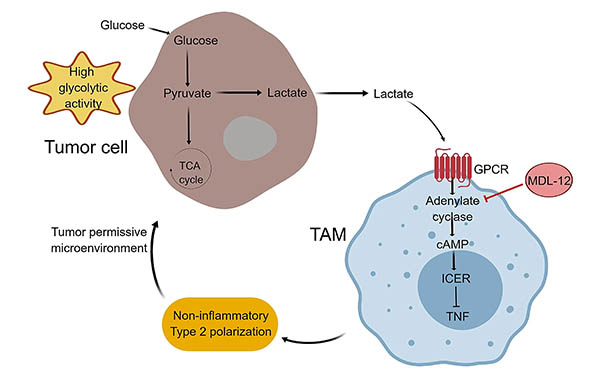 Fig. 1. Polarization of TAMs due to high glycolytic activity of tumor cells. Adapted from Sekine et al. 2018. High glycolytic activity leads to an increase in organic acids that decreases extracellular pH. The acidic microenvironment is sensed by GPCRs (GPCR65 and GPCR132) expressed on TAMs, inducing the expression of ICER, which inhibits the transcription of TNF and leads to the conversion of TAMs into a non-inflammatory phenotype. MDL-12 inhibits adenylate cyclase and decreases the growth of melanoma tumors in vivo.

The adenylate-cyclase inhibitor MDL-12 prevents the increase in cAMP and appears to be able to reduce the growth of melanomas in vivo in a syngeneic mouse model. However, inhibition of this GPCR-cAMP pathway was ineffective in cell lines, suggesting that a functional immune system is required for a response. This information can be used to help develop new cancer therapies that target this pathway in highly glycolytic tumors, like melanomas.

Learn more about the different macrophage subset phenotypes, signaling pathways involved in their activation, and markers in our Macrophage Polarization Mini-Review.