The Good, the Bad and the Ugly Side of the Gut Microbiome

While immunotherapy has remarkable success for some patients, not everyone responds to it. Identifying predictive biomarkers would help optimize treatment strategies for patients.  Several studies involving antibiotics hinted that the gut microbiota may play a role in anti-tumor immune responses. In a mouse model of adoptive T cell therapy, antibiotics significantly impaired anti-tumor responses. The authors proposed that microbial translation to the lymph nodes helped to prime an immune response via TLR4 signaling (Paulos et al. 2007).  Additionally, several independent retrospective analyses have noted poorer responses to immunotherapy if antibiotics were taken prior to the start of treatment (Zitvogel et al. 2018).

The confirmation of a role of the gut microbiome came from two pivotal papers published in the same issue of Science in 2015 (Sivan et al. 2015, Vétizou et al. 2015). Vétizou et al. demonstrated that treatment of cancer with Ipilimumab antibodies against CTLA-4 caused changes in the gut microbiota of mice and that the effectiveness of this treatment seemed to depend on the presence of distinct Bacteroides species. Receiving antibiotics  prior to treatment with Ipilimumab impaired the effectiveness of this therapy and germ-free mice did not respond to Ipilimumab therapy. Additionally, FMT with samples taken from human melanoma patients that responded well to anti-CTLA-4 immunotherapy into mice, led to the mice having an increased abundance of B. fragilis, which abundance negatively correlated with tumor size after CTLA-4 blockade treatment (Vétizou et al. 2015).

These results were complemented by the work performed by Sivan et al., which demonstrated that two groups of genetically–similar mice, purchased from two suppliers, had differing responses to PD-1 blockade.  These responses were attributed to differing gut microbiota and co-habiting, or FMT, from mice with ‘good’ bacteria to the mice lacking these bacteria, leading to enhanced responses to PD-1 blockade (Sivan et al. 2015).  Moreover, they were able to identify a particular species that they hypothesised to be responsible for these favorable PD-1 responses (Bifdobacterium). They also observed that giving mice an oral probiotic containing Bifdobacterium induced a favorable PD-1 response, attributed to enhanced dendritic cell maturation and increased tumor specific CD8+ T cell activity.

While initial insights came from mouse models, a number of recent papers have identified different species of bacteria that may determine a ‘favorable’ or ‘unfavorable’ response to immunotherapy in humans.  In general, a more diverse gut microbiome seems to correlate with better responses, but the abundance of certain bacteria has also been reported to improve responses. These include: Clostridiales, Ruminococcaceae, and Faecalibacterium (Gopalakrishnan et al. 2018), Akkermansia muciniphila (Routy et al. 2017) and Bifidobacterium longum, Collinsella aerofaciens, and Enterococcus faecium (Matson et al. 2018).

Conversely, ‘bad’ bacteria have also been found to correlate with poorer outcomes; a high relative abundance of Bacteroidales is associated with an unfavorable response of melanoma patients to anti-PDI immunotherapy (Gopalakrishnan et al. 2018).

Taken together, these studies suggest that a patient’s gut microbiome could act as a biomarker for immunotherapy success.  Therefore, influencing the amount of ‘good’ bacteria or decreasing the number of ‘bad’ bacteria could ultimately help to improve outcomes for patients.

Manipulating the Microbiome Alongside Immunotherapy? 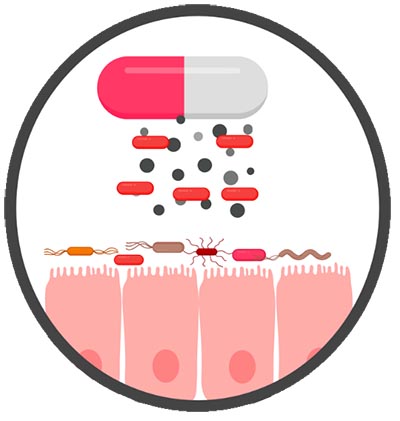 FMT might be a difficult idea for many patients to swallow, but it has proven to be a safe and effective treatment for resistant Clostridium difficile infection. Patients treated with FMT from healthy donors showed a 90% response rate while conventional treatments were ineffective (Borody et al. 2004).

With a number of Phase 1 clinical trials for FMT in patients undergoing immunotherapy underway, it will be interesting to see if manipulating the gut microbiota delivers the expected results.

Delve deeper into the interplay between the immune system and cancer with our mini-review.

This blog was awarded 3rd place in the 2021 Bio-Rad Science Writing Competition....