Pokemon Antibody - I Choose You

2020 has been a year like no other and as the festive season approaches, we all could use a little light relief. Therefore, we have searched through our catalog to show you some of the antibodies with hilarious names. There are lots more out there, these are just some of our favorites and we would love to hear yours!

If I had to choose my antibody 'team', I would start with Rabbit Anti-Pokemon Antibody, also known as ZBTB7A (Zinc finger and BTB domain-containing protein 7A). Rather than being a reference to a popular 90s TV show, Pokemon stands for POK erythroid myeloid ontogenic factor. The POK (POZ and Krüppel) protein family have an aminoterminal POZ (poxvirus and zinc finger; also called BTB) domain and carboxy-terminal Krüppel-type zinc fingers, which bind to the DNA.

Pokemon is a transcriptional repressor crucial in oncogenesis. For example, it can inhibit the transcription of the tumor suppressor gene ARF. This protein could be an effective new target in the ongoing cancer 'combat'.

With a name reminiscent of a red TV puppet, the Goat Anti-Human ELMO1 Antibody binds to human ELMO1 (engulfment and cell motility protein 1). This cytoplasmic protein is also known as protein ced-12 homolog. Just like Elmo groups with Bert and Ernie in 'Sesame Street', ELMO1 associates with DOCK1 and CRK when cytoskeletal rearrangements are required (during phagocytosis and cell motility).

It may sound like it recognizes little blue people, but in this case our Rabbit Anti-Human SMURF1 Antibody binds to the E3 ubiquitin-protein ligase SMURF1 (SMAD ubiquitination regulatory factor). SMURF1 is a ubiquitin ligase specific for SMAD proteins associated to receptors (R-SMADs). SMAD (SARA is an endosome-specific scaffold) proteins can be R-SMADs, cooperating SMADs (Co-SMADs), or inhibitory SMADs (I-SMADs).

Although there are more than one hundred Smurf TV characters, there are only two known SMURF isoforms: SMURF1 and SMURF2. Both proteins are known to negatively control the bone morphogenetic protein (BMP) and the transforming growth factor beta (TGF-β) signaling pathways. However, these ubiquitin ligases are responsible for protein ubiquitination; thus, they also regulate numerous cellular processes, such as cell proliferation and differentiation, gene expression, chromatin dynamics, DNA damage response, and migration.

Even though all the cartoon Smurfs are very similar, each one is unique. The same is true of SMURF proteins. SMURF1 works as an oncogene, while SMURF2 has a dual role and can both promote or inhibit tumors. Maybe, in Smurf Village, they would be called 'Endure Smurf' and 'Dichotomy Smurf', respectively. They smurf on tumor cells. 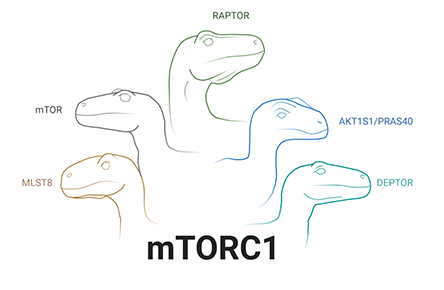 If you have dreamed about having dinosaur DNA or molecules in your body, you will have to continue imagining it because Mouse Anti-Human RAPTOR Antibody recognizes RAPTOR (regulatory-associated protein of mTOR), which has nothing to do with dinosaurs. However, just like a velociraptor, RAPTOR belongs to a 'pack'. RAPTOR along with mTOR (mammalian target of rapamycin), MLST8, AKT1S1/PRAS40, and DEPTOR generates the mammalian target of rapamycin complex 1 (mTORC1). When the 'herd' is together, mTORC1 regulates cell growth and survival.

RAPTOR is mostly found in the skeletal muscle and to a lesser extent in brain, lung, small intestine, kidney, and placenta tissue. This protein is also known as p150 target of rapamycin (TOR)-scaffold protein.

Among our 'Antibodies Park', we could also encounter the 'T-REX' with our Rabbit Anti-TREX1 Antibody. TREX1  (three-prime repair exonuclease 1) is also known as DNase III. This nuclear enzyme has 3'-5' exonuclease activity that proofreads human DNA polymerase activity. T-REX1 can digest DNA with mismatched 3' termini and prevent DNA ends from reannealing.

Join in the Fun!

Can you find any other proteins with interesting names that we have antibodies for? Search our catalog with A.I.den our smart antibody search and see what you can find. Share any hidden gems with us on social media by using the hashtag  #AntibodyIChooseYou

All images in this blog are copyright of Marta González-Prieto