Alex’s ‘burning passion for biology’ is evident in the way that he writes. The judges were impressed by Alex’s writing style and his ability to write honestly around an emotive subject, as well as eloquently highlighting why public engagement with science is vital. An outstanding article and a very worthy winner of our competition.

Alex is a PhD student at the Cancer Research UK Manchester Institute, which is part of the University of Manchester, UK.

We are delighted to publish Alex’s entry below.

As scientists, we are often reminded of the importance of communication, largely in the context of how we can most effectively disseminate our research among our peers. We are regularly reminded of how to design the ideal research poster, what you can do to give a clear academic talk and of course, how to publish succinct, high-impact research. However, among the myriad of discussions and workshops that train us to be efficient communicators, an oft-neglected aspect is the importance of engagement and inspiration, specifically in regards to fostering scientific curiosity and engagement among members of the public. The significance of scientific public engagement was a concept which became apparent, for me, many years ago, but which has since been solidified after I began my PhD at Cancer Research UK – Manchester Institute (CRUK-MI).

At the age of 11, my family received some news which rocked it to the core – my mother, who was ordinarily in good health, was diagnosed with a benign acoustic neuroma. Looking back, I'm not sure I was able to fully appreciate the seriousness of the situation, although I could tell by the reactions of my immediate family that this news was far from trivial. Naturally, at such a young age and lacking access to a definitive authority who could explain the situation in simple terms, I tempered my curiosity by searching the web for any answers that I could find: 'What is a tumor?', 'What causes a tumor to grow?', 'If my mum is ill, will I get ill, too?'.

As you may expect, at the age I was and with the understanding of biology that I had, there was very little accessible to me. Nevertheless, I found comfort in the knowledge that I was able to gain, no longer fearing the unknown. Simultaneously, I inadvertently discovered that I had a burning passion for biology, and soon found myself searching for information beyond the details of my mother's condition, purely to sate my curiosity regarding how the human body worked.

As my mother's condition rapidly worsened, I took comfort in learning as many details as I could, informing my family (perhaps, insensitively) of what I understood about the biology of this disease. Potentially as a means of keeping me quiet at such a critical time, my family organized a quick chat between the surgeon who was to perform the operation, and myself. To this day, I distinctly remember this conversation, and how his calm, explanatory demeanor clarified many of my burning questions. If I were to highlight a moment in which I knew I wanted to be involved in life sciences, this would be it.

During my mother's recovery, through which an outward feature of her return to health was substantial facial palsy, I recall being confused, upset, and frustrated at how people gawped and stared at her, as if she were some bizarre caricature. How could people not understand what she'd been through, and that by being here, she had survived a truly terrifying trial? In time, it occurred to me that these people I was vilifying weren't mocking her, but were, as I once was, curious about what had happened. In retrospect, I was fortunate that through my proximity to my mother's ordeal I had achieved understanding, and wished that at some point I could explain the details to others. 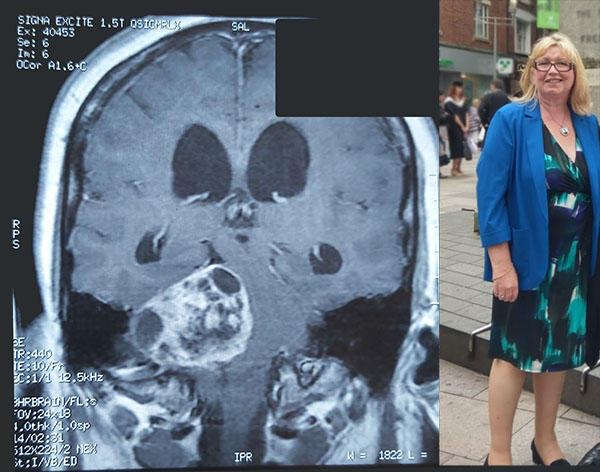 As a PhD student today at CRUK-MI, I have endeavored to include an aspect of public engagement in my training, aiming to develop the values of translational research and community outreach fostered by the institute and its close association with The Christie Hospital in Manchester. Although I began my PhD with this secondary goal in mind, it was through my experiences with CRUK-MI that I was able to refine my approach and learn how to disseminate information in a professional, sensitive, and (crucially) easily understood manner. My first opportunity to address a lay-audience in this regard was via a '3-minute thesis' competition at a local high school, where I was able to describe the work I'd conducted at that point in my PhD as inspiration for teenage students performing their own presentations. I was inspired at just how thirsty for knowledge these students were, asking questions from left-field and truly reinforcing the importance of fostering curiosity at a young age.

My personal highlight was the 'Behind the Labels' event, organized by the CRUK-MI research engagement team. For an evening on World Cancer Day, the institute was opened to clinicians, researchers, and the general public to improve communication between the three and to learn from each other's experiences. During this event I manned an interactive demonstration that explained targeted therapy in accessible terms. Between the general interest in the demonstration, one particular moment stood out – a young boy and his mother, the latter of which was currently receiving treatment at the Christie Hospital, approached and took part. Although initially shy, I soon learned that her son was filled with burning questions about both my explanations and the particular details of his mother's illness, and was generally enthralled by the answers I provided. As his mother politely moved on, dragging her still-questioning son in tow, I couldn't help but see the parallels between this boy and my own experiences when I was his age, fulfilling my desire to help others from all those years ago.

Ultimately, although research engagement is often considered secondary to our immediate goals as researchers, I personally believe it's a critical facet of the scientific profession. With the widespread accessibility of information in the current era, alongside the abundant disinformation which is unfortunately associated with it, I believe that scientists from any stage in their career, from junior researchers to institute directors, have an obligation (and hopefully, a desire) to engage with those who possess the embers of curiosity. Consider how you can take the time to interact with others and enrich them with your understanding.

After all, you may never know if you've just inspired the next generation of scientists!

There was a huge number of entries from all around the world and the judges were impressed by the high standard of submitted articles across a breadth of different topics. Alex is the winner of a commemorative trophy, a copy of ’The Scientist’s Guide to Writing: How to Write More Easily and Effectively Throughout Your Scientific Career’, and Science Writing Mentorship from our Lab Crunches Editor.

'I'm extremely grateful to Bio-Rad for allowing me the opportunity to tell my story. I hope that my experiences can inspire others to get out there and encourage the next generation of scientific minds!' - Alex Du Feu