The Path to a Nobel Prize

Winning a Nobel Prize is something that many scientists aspire to, yet only a select few make discoveries so notable that they are awarded this honor. As the Nobel Prize cannot be awarded posthumously, to be eligible, the discovery must have a significant impact on humankind during the discoverer’s lifetime, which makes winning it even more commendable.

In this blog, we examine why understanding the oxygen sensing mechanisms of cells was worthy of a Nobel Prize and interview Professor Sir Peter Ratcliffe about his career, winning the Nobel Prize for Physiology or Medicine 2019, and advice for early career researchers.

How Do Cells Respond to Hypoxia?

It has been known for over 100 years that humans can adapt to low levels of atmospheric oxygen. The increase in red blood cells caused as a result of high altitude has made altitude training popular with endurance athletes hoping to gain an edge.

The identification of erythropoietin (EPO) in the 1970s fueled the concept of an oxygen sensor in cells that enabled adaptation to hypoxia (Miyake et al. 1977). EPO stimulates the bone marrow to produce more red blood cells (erythrocytes), enabling an increase in the oxygen carrying capacity of blood. The kidneys were identified as regulators of the number of red blood cells and as a major site of EPO production (Bauer and Kurtz 1989). Technology later enabled the production of recombinant EPO as a treatment for anemia. However, the molecular mechanisms governing EPO’s regulation and the cellular machinery in the hypoxic response were not elucidated until much later.

In response to hypoxia, a number of cellular adaptations occur, including angiogenesis, a shift in metabolism to anaerobic glycolysis, and modification of apoptosis (Figure 1). 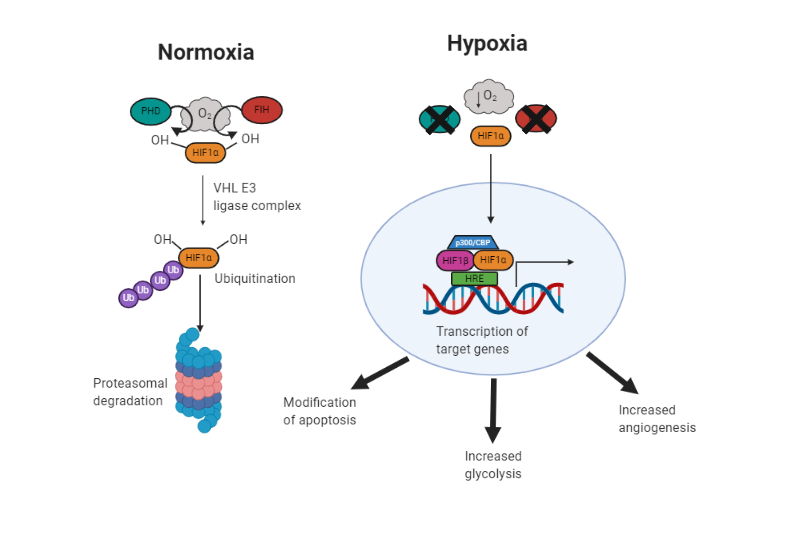 Fig. 1. Adaptation to hypoxia. In normal oxygen conditions (normoxic), prolyl hydroxylase (PHD) and factor inhibiting HIF (FIH) add hydroxyl groups to hypoxia inducible factor (HIF) 1α. This targets it to the von Hippel Lindau E3 ligase complex. It is then ubiquitinated and targeted to the proteasome for degradation. In hypoxic conditions, PHD and FIH are inhibited due to the lack of oxygen and HIF1α can translocate to the nucleus, dimerize with its transcription partners, and activate transcription of hypoxia response element (HRE) containing genes. This brings about changes to help survival, including modification of apoptosis, increased glycolysis and angiogenesis.

As tumors are often in a hypoxic environment, the same pathway enables them to create new blood vessels (angiogenesis). Therefore, by understanding the pathway, we can try to inhibit HIF and restrict the blood supply to cancer cells.

Professor Sir Peter Ratcliffe has been instrumental in our understanding of how human and animal cells respond to hypoxia. Together with William Kaelin and Gregg Semenza, he has helped us understand the molecular mechanisms that control the hypoxic response and their research has improved, among others, treatments for anemia, cancer, and kidney disease.

The Start of an Illustrious Career

Peter Ratcliffe started off his career as a physician and kidney specialist (nephrologist) in Oxford, UK. It was during this time that he first became intrigued by the oxygen-sensing capacity of cells. His initial experiments demonstrated that all of the components for EPO oxygen sensing were already present in the kidney (Ratcliffe et al. 1990) and moreover, that hypoxia can induce EPO expression in other tissues like the brain and spleen (Tan et al. 1991, Tan et al. 1992). These discoveries set a career dedicated to hypoxia in motion, and in particular research centered on the regulation of hypoxia inducible factor (HIF), the oxygen-sensing molecular switch.

However, like many other scientists, publishing his research was not straightforward. While he was immediately convinced about the importance of his findings, the scientific community was slower on the uptake. His initial discovery of a widespread operation of hypoxia signaling pathways was rejected by a major journal, as it did not recognize the significance of these findings. The feedback at the time was that the field was too small and the journal had difficulty finding a reviewer for his paper. He has kept this rejection letter and showed it during his Nobel Prize lecture to demonstrate that even important discoveries face setbacks. However, working in a niche field turned out to be a blessing for Sir Peter as it was less competitive, making it possible for him to make a big contribution to science.

A Nobel in the Making 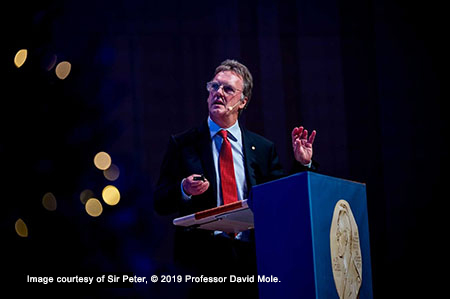 Professor Sir Peter Ratcliffe is currently Director of Clinical Research at the Francis Crick Institute, UK and Director of the University of Oxford’s Target Discovery Institute, UK. He has won numerous awards and accolades throughout his career, including a knighthood in 2014 and the 2016 Albert Lasker Basic Medical Research Award, which he shared with William Kaelin and Gregg Semenza. The Lasker Award has gained a reputation in recent years for predicting future Nobel Laureates and indeed this was the case, as the three scientists were jointly awarded the Nobel Prize in Physiology or Medicine 2019, “for their discoveries of how cells sense and adapt to oxygen availability.”

Q: What inspired you to study hypoxia?

PJR: I trained as a nephrologist and became interested in the blood circulation within the kidney, where the vessels run counter-current, so as to produce quite profound hypoxia within the renal tissue. It was thought that this pre-disposed patients to kidney interim shock. For a time, I worked on this problem, but then became interested in whether the kidneys’ circulation had a relevance to its production of EPO. We didn’t really solve that problem, but it led me to consider the molecular mechanism by which hypoxia is sensed. This was thought to be something that occurred in very specialized cells within the kidney, and that’s where I started.

Q: What would you say was the pivotal point in your research career when you knew you were onto something significant?

PJR: In our early work we identified the control sequences of the erythropoietin gene that would respond to hypoxia. We did this in cells derived from liver, which is the other organ making EPO. As I said, it was believed that the oxygen sensing system was private to EPO, since EPO responds to changes in the oxygenation of the blood with such exquisite sensitivity. Much to our surprise, we found that when these sequences were introduced into other cells, apart from kidney or liver, nothing to do with making EPO, they responded to hypoxia in pretty much the same way. This implied that there must be an oxygen-sensing system working across all human cells, and working with pretty well the same sensitivity as had been described for EPO. The implication of course was that there must be other targets of the oxygen-sensing process, and that’s of course precisely what we went on to show and then to define the underlying oxygen-sensing mechanism.

Q: How does it feel to win a Nobel Prize?

PJR: Very good, thank you. No, seriously, the experience is rather surreal. Within a few days we had accrued about 2,000 emails, and within a couple of months, about 300 speaking invitations. What was extraordinary was being bestowed with infinite wisdom, almost overnight. For a time, even my children thought I might know about things relevant to their affairs!

Q: What advice would you give to early-career scientists?

PJR: Pick your own question. And don’t be too concerned about what other people think might or might not be important. The importance of the answer, of course, only becomes apparent when the question is indeed answered. So it must be something that you think might be reasonably tractable in your own hands.

Thank you Professor Sir Peter Ratcliffe for sharing your insights with us. We hope that our readers are inspired by your career and we look forward to seeing all of your future discoveries.