Tuberculosis is a devastating disease affecting humans, cattle, and other animals. The two main tuberculosis bacteria Mycobacterium tuberculosis and Mycobacterium bovis primarily infect humans and animals, such as cattle, respectively, with relatively few cases of each bacteria infecting the other host. However, not much is known about why these bacteria seem to prefer different hosts, or the conditions that would need to arise for M. bovis to “jump” species and start circulating in humans.

In this blog, we discuss new research that reveals how M. bovis manipulates bovine, but not human, macrophage defenses to cause disease, and helps explain why tuberculosis bacteria have more luck in separate hosts.

The Burden of Tuberculosis

Among adults, tuberculosis is a leading cause of mortality from an infectious agent and causes an estimated 1.3 million deaths every year (Furin et al. 2019). In addition to the huge disease burden of M. tuberculosis on the human population, a related species of bacteria, M. bovis, causes bovine tuberculosis resulting in widespread death of cattle and wild animals (Queval et al. 2021). In Britain in 2019, 40,000 cows were slaughtered after testing positive for tuberculosis and the control program costs more than £120 million every year.

Despite sharing 99% of their genetics, M. tuberculosis primarily infects humans while M. bovis primarily infects cattle and other animals (Queval et al. 2021). While sporadic cases have occurred on the contrary, such as when humans come into close contact with cattle or drink unpasteurized milk, M. bovis doesn’t appear to sustain transmission cycles in humans. Likewise, pathology caused by M. tuberculosis is uncommon in cattle (LoBue et al. 2010). These species-specific interactions are called “host tropism”.

Little is known about why these closely-related bacteria infect different hosts. Accordingly, we don’t fully understand the factors that might cause each bacteria to “jump” species. Sudden circulation of M. bovis in humans could be a public health disaster; in 2005, the World Health Organization (WHO) stated that bovine tuberculosis was the most neglected zoonotic disease threatening human life (Queval et al. 2021). Research into the mechanisms of tuberculosis pathology would help us to understand how the bacteria are adapted to different hosts and could improve future outcomes for human and animal health.

Macrophages are the first line of defence against human and bovine tuberculosis but can also be utilized by tuberculosis and become giant reservoirs of bacteria. A hallmark of tuberculosis pathology is the formation of multinucleated giant cells (MNGCs) with over 20 nuclei. MNGCs are created when pro-inflammatory macrophages fuse at the site of infection and contribute to the inflammatory response in tuberculosis (Queval et al. 2021).

A team of researchers led by The Francis Crick Institute hypothesized that early interactions between bacteria and macrophages could explain host tropism, and studied how bacteria interact with macrophages. To do this, they infected macrophages from humans and cows with M. tuberculosis or M. bovis, and studied how the bacteria and cells behave under these infection combinations. Formation of MNGCs would be an indication of the bacteria causing pathogenesis in that cell type (Queval et al. 2021).

The study found that while both pathogens replicate effectively in bovine macrophages, only M. bovis and not M. tuberculosis promoted the formation of MNGCs, suggesting some interaction between the host and bacteria which explains this species tropism. They next looked for the mechanism of this interaction.

One of the few proteins with a substantial abundance difference between M. bovis and M. tuberculosis is an immunogenic protein called MPB70, highly expressed in M. bovis. The researchers created a strain of M. bovis, with the gene encoding MPB70 knocked out, to test whether this protein was required for multinucleation. Accordingly, formation of MNGCs was strongly impaired in bovine macrophages when the MPB70 gene of M. bovis was knocked out.

It also sheds light on how tuberculosis has evolved to manipulate host defense for its own gain. Dr Max Gutierrez, the principal investigator of the study, quoted in a Royal Veterinary College press release: “This work opens up new insights into how the pathogens that cause TB in humans and animals have adapted to their hosts.”

Importantly, the study utilized a “One Health” approach, which integrates knowledge from human disease, animal health, and environmental research to solve problems which intersect these three priorities, like the burden of tuberculosis.

Are you studying Mycobacterium tuberculosis or interested in how macrophages can help us understand the zoonotic potential of tuberculosis? Bio-Rad has a range of antibodies and resources to support tuberculosis research. 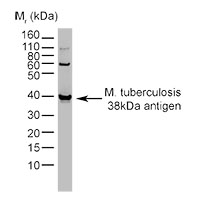 In this blog, we discuss Porcine Reproductive and Respiratory Syndrome (PRSS)-resistant pigs and how this could help alleviate the economic burden of ...