As part of International Day of Women and Girls in Science, Bio-Rad invited researchers to share their own experiences of being a women in science. In this article, we speak to Assistant Professor Lynda Coughlan about her career.

Lynda Coughlan is currently an Assistant Professor at The University of Maryland School of Medicine, Baltimore, USA. Her research focuses on developing adenoviral vectors for vaccines against respiratory viral pathogens, including a universal coronavirus vaccine. She started off her research career in the Republic of Ireland before studying for a PhD in the UK. After several postdocs in the UK, she secured funding to relocate to the USA and recently established her own independent research group. 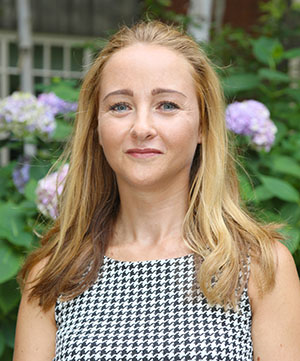 Bio-Rad (BR) When did you first become interested in a career in science?

Lynda Coughlan (LC): I was always interested in science, from a very young age. I suppose this is unusual as there were no scientists or doctors in my family. However, as far back as I can remember, I was fascinated by the human body and disease. The HIV epidemic had a huge impact in the 1980s, with extensive media coverage, and this is what really stimulated an interest in virology for me.

BR: Can you describe your career path?

LC: I grew up in the Republic of Ireland. In secondary school (high school), I selected all three science subjects, biology, chemistry, and physics (as well as maths, English, Irish, French, and music – the Irish system requires a minimum of six subjects). I subsequently went on to do a BSc in Microbiology at University College Cork (UCC). This degree only included two classes directly in virology, so after graduation I decided to apply for an MSc in Virology at the London School of Hygiene and Tropical Medicine. After that, I studied for a PhD in viral gene therapy in the UK, followed by post-docs at The University of Glasgow, and The University of Oxford. In 2017, I was awarded independent funding from the British Medical Association (BMA) which allowed me to relocate to the US to the Icahn School of Medicine at Mount Sinai, New York, where I was appointed as junior faculty. I just moved again to start my own independent laboratory at The University of Maryland School of Medicine in Baltimore.

BR: Have you encountered any challenges along the way and if so, how did you overcome them?

LC: Trying to move state and start a new lab in the middle of a pandemic has been particularly challenging! Throughout my career, I faced numerous issues related to the instability and short-term nature of research funding, and the difficulties that creates for postdocs, trying to establish research independence. Unfortunately, I have experienced several issues sometimes faced by women in science including unsupportive mentors, favoritism, and sexism. I have developed a very thick skin and learned to believe in myself. You cannot get disheartened by rejection, just keep trying. My most important advice is to surround yourself with peers and collaborators who you can trust and talk through all of the challenges of academia.

BR: Can you tell us about your current research?

LC: My research laboratory is focused on developing innovative platform vaccines against respiratory viral pathogens, and in understanding exactly what type of immune response is preferable for protection from infection. We have several research projects to develop novel adenoviral vectors as universal vaccines for influenza and coronaviruses, as well as respiratory syncytial virus which can be a very severe illness in young infants and premature babies.

BR: What has been your career highlight to date?

LC: Getting my first NIH (US National Institute of Health) grant in 2019 was one of the most exciting moments so far. These are very competitive grants, similar to UK Research Council grants, and having one of these awards prior to going on the faculty job market was central to me getting a principal investigator (PI) position. Besides the personal and career challenges the pandemic has presented, after many years of working towards the ultimate goal of establishing my own lab, I am currently enjoying this time, planning projects, and recruiting new students and postdocs.

BR: Are there any scientists who have inspired you?

LC: Several people have inspired me at various stages in my research career. I was fortunate to have many positive role models to act as formal and informal mentors throughout the years, including my virology lecturer at UCC, Dr Martina Scallan, Prof Wendy Barclay at Imperial College London, and Prof Peter Palese at Icahn School of Medicine at Mount Sinai. The rise of science Twitter has also allowed me to identify new scientific role models such as Prof Akiko Iwasaki and Prof Erica Saphire. Obviously, there are many individuals who I admire for their beautiful science, openness for collaboration and sharing of reagents, as well as the ability to communicate research clearly and engage the community. With this in mind, I would have to mention Dr Jason McLellan and Dr Kizzmekia Corbett, both investigators who have played a central role in the development of vaccines against the novel coronavirus. Historically, I also had huge admiration for the research of Prof Ralph Steinman, who was awarded the Nobel Prize posthumously in 2011.

BR: What advice would you give to women looking to pursue a career in science?

LC: I think my advice would be the same for anyone interested in pursuing a scientific career: if science excites you, or drives your curiosity, then don’t let anything hold you back. Despite all of the challenges, there are many wonderfully supportive and kind people in science who will encourage you. The opportunity to have a career where you learn every day, and the possibility that your research could contribute to society or save lives, is just wonderful. In addition, there are now many different career paths opening up for science graduates, from policy to engagement, education, funding, research, industry, and patent law. Studying science is not limited to academia.

Coronavirologist, Stuart Weston PhD, shares his insights on what it is like being a researcher on coronaviruses during the 2020 pandemic.