The antibody generation service is based on a vast library of designed antibody genes in combination with a powerful in vitro selection technology:

The HuCAL PLATINUM phage library contains more than 45 billion functional human antibody genes in a Fab format. It has been designed to cover the human antibody diversity, to be flexible for further engineering and to yield antibodies with high expression titers.

The library is based on a set of modular framework master genes with highly diversified complementarity determining regions (CDRs) created by trinucleotide mutagenesis (TRIM). The genes cover more than 95% of the structural immune repertoire. HuCAL antibodies are based on an analysis of human antibody germline genes and are therefore fully human. The TRIM-based CDR cassettes ensure a high quality library with designed composition.

Since the framework master genes have been designed to be modular and contain unique restriction endonuclease sites between framework and CDR boundaries, HuCAL antibodies can routinely be affinity matured either during the antibody selection (RapMAT) or at a later stage, if needed.

As this is an in vitro method, the sequences of the final antibodies are always known, so the antibody can be reproduced synthetically, resulting in a long term secure and batch-to-batch consistent supply.

CysDisplay is used to select antibodies from the library

CysDisplay technology is a proprietary form of phage display featuring the surface display of an antibody fragment on filamentous phage via a cleavable disulfide bond. E. coli carrying an antibody-encoding phagemid simultaneously expresses the engineered Fab antibody and the engineered phage surface protein III, both carrying a single cysteine at an appropriate site. Following infection with helper phage, each cell produces phages displaying the Fab on the surface by means of disulfide linkage between Fab and gene III protein. The corresponding antibody genes are encoded on the packaged phagemid, thus the genotype and the phenotype of the antibody are physically linked. 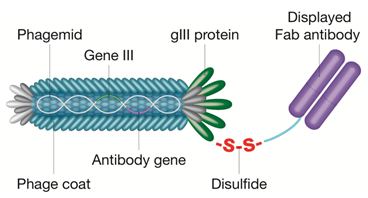 Fig. 2. CysDisplay screening technology. Fab fragments are linked to phage particles by a disulfide bond rather than a peptide bond. This allows elution of phage with reducing agents during antibody selection.

The cleavable disulfide bond between the phage and the Fab facilitates the elution of specific high affinity phages by adding reducing agents, rather than using methods such as acid elution that rely on breaking the antibody-antigen interaction. Therefore high affinity antibodies are not lost during selection, as can be the problem with traditional phage display methods. The procedure has been automated to a large degree for high throughput selection. 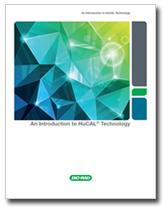 An introduction to HuCAL technology

Discover the benefits of this cutting-edge antibody generation technology through the pages of our HuCAL antibodies technical manual, which describes the HuCAL technology in detail and its advantages over conventional antibody production methods. 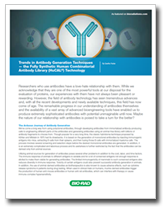 This technical article describes the concept of phage display antibody libraries, a history of the design and development of the HuCAL technology and how it is used today.